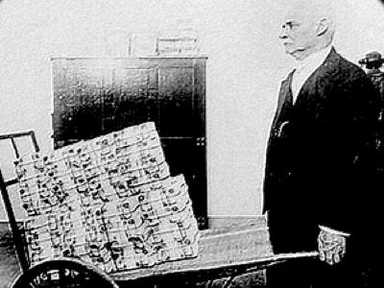 'We're still at the stage in which everyone sees their views and assumptions as being confirmed by the corona crisis. This is true in the West and East, on the left and on the right. But the possible consequences of this crisis are already becoming apparent.

One of them will be a decline in globalization. Its slowdown had already begun before the outbreak of the pandemic. For economic reasons, but also for reasons of security policy, Western countries have long wanted to reduce their dependence on China. The COVID-19 crisis is now accelerating this trend and economic interdependence will decrease. In the medium term, "just in time" production will decrease. Especially in the health care sector, the emphasis will be on stockpiling.

The interesting question here is: Will this be solved nationally or in cooperation with other countries? Will we act nationally and alone in the health-care sector or together with our European partners?

Another consequence will be a decline in populism and an increase in souverainism. Once an end to the acute pandemic is in sight in most countries, people will see that populist governments were worse crisis managers when compared to others. The majority of populist leaders, most of all Donald Trump, have so far demonstrated an astonishing inability to respond to the most pressing concerns of their citizens and to show at least some degree of empathy.

But there is one danger to all this: If we do not succeed in achieving an economic recovery after the crisis, the populists will gain new support. The return of hyperinflation, for example, could lead to social unrest.

The nation state, on the other hand, is likely to be one of the big winners of the crisis. Like the health sector, our food supply will benefit from re-localization. Nation states will tend to withdraw into themselves and demand increased protection against external threats. This could come at the expense of Europe's Schengen system of open borders. Here, too, the question arises: Will this new sovereignty be national or European?

Will we also enter an era of digital authoritarianism and sacrifice certain freedoms? I'm a pessimist. In any case, it is likely that most of the population will be prepared to accept major restrictions on their freedoms, as they were after Sept. 11. We will accept more control.

Will some major powers emerge victorious from this pandemic? I don't think so, at least not for the next two years. Even if the U.S. no longer has a leading role, no other power will take over this role either. No country will emerge stronger from this crisis. In five years' time, of course, things may look different, but the U.S. will have repositioned itself by then. We're always too quick to bury Europe. After all, Europe has demonstrated a certain ability to adapt to crises.'

The decline of populism is a moderate decline. For example, the AfD in Germany hovered around 15% for a while, now it's hovering around 10%. The rise of Merkel's CDU is more substantial, but this might change quickly as well. When the crisis is over people tend to forget it.
Yes, Trump, unlike other leaders, did not profit from the crisis, but it's still possible that he will win the 2020 election.

More important: if the nation state turns out to be the big winner of this crisis we must admit that populism has won. Because the nation state and more sovereignty on a national level were and are the big projects of the populists, in Europe and in the US. They favored the abandonment of multilateralism and largely they got it.

Hyperinflation appears to be unlikely, some warned for hyperinflation after the banking crisis in 2008, after the central banks opened the money tap, in various ways, well, we got deflation, not inflation.

As I said before, who can be against public health? The moment your president or your prime minister becomes a national doctor, and the state itself becomes a national doctor, opposition quickly turns into the freak show of the anti-vax movement. And from there, personal freedom will turn out to be a rather unpatriotic afterthought.
At best, something you utter a few words about on memorial day.