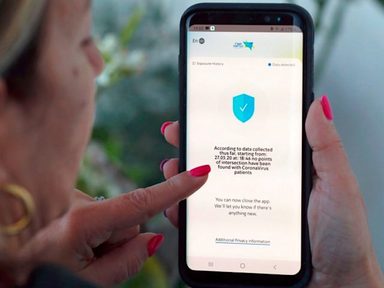 On the road to hell, Amos Harel in Haaretz:

'Israel's extensive cellular tracking of Israelis is being described as a success story in battling the coronavirus – and now there is talk about expanding it. The ministerial committee that debated the issue over the past several days has fallen in line with the position of Prime Minister Benjamin Netanyahu, and is requesting that the Shin Bet security service be given even greater access to additional sources of information and more precise analytical capabilities.
For years, Israel's intelligence community has gotten used to employing electronic surveillance methods – characterized by an ever-increasing sophistication and penetration – to track enemies and Palestinian populations under occupation. Now, as a new threat emerges and the world order is transformed in an instant, it has the perfect excuse to invade the lives of Israeli citizens.
The road to hell is littered with good intentions, and the need to swiftly stop the spread of the virus has led to some dangerous shortcuts. The main players in these efforts are the Shin Bet (which has actually been relatively cautious, knowing how sensitive the issue is); Military Intelligence, the Mossad, Israel Police and civilian technology companies. All are involved, in one way or another, in steps which constitute the unprecedented prying into the lives of Israeli citizens. Some people who took part in discussions have already noticed a dangerous blurring of lines; uniformed officials who take the surveillance for granted and now wish to expand their authority.'

'Israeli doctors – not for the first time – take a more sober stance. In a letter to the Knesset Foreign Affairs and Defense Committee, the Israel Association of Public Health Physicians write that at this point, the spread of the virus is not a health crisis that justifies "intrusive and controversial means to track the citizens of Israel."
“There is no proof," the doctors write, "that these measures are effective in reducing the spread of the illness. And they are even liable to put public health at risk and challenge public confidence at the expense of proper and effective tools employed for epidemiological purposes."

The World Health Organization believes widespread testing for coronavirus alongside an effective effort to locate chains of contagion, are the preconditions necessary for each country to loosen its closure restrictions.
The Israeli government, which lifted some restrictions at the beginning of the week in light of a trend toward a reduction in the pace of the spread of the disease, hasn’t bothered to establish any such basis for its decisions.
Experts believe that the quotient that forms a basis for measuring the spread of the (Ro) virus is already lower than 1, which means that each infected person is on average infecting less than one other person. This happened more than a week ago, largely as a result of the tighter restrictions imposed at the end of March. At the beginning of the crisis the quotient stood at close to 2, and by the end of March it decreased to around 1.2. Now that it has fallen beneath 1, the conclusion may be drawn that the coronavirus has been curbed and the first stage of the fight against the virus has been relatively successful.
The easing of restrictions will likely be accompanied by a rises in numbers of infections, but the Health Ministry hopes this will take place in a relatively controlled manner, without any massive new outbreak. The problem as usual is in the time gap between infection, display of symptoms, testing, diagnosis and hospitalization. Since this process takes between one and two weeks in Israel (and symptoms largely appear only after at least four days) the data on known positive cases do not reflect the real situation.
It has been anticipated that the government will discuss further easing of restrictions in another week and a half. The risk is that a rise in numbers of cases will be felt only after Independence Day, and that will only be after a decision is made to further ease limitations. As a result the health system may be unusually overburdened with cases in the middle of May. This could happen despite the fact that the risk of hospitals buckling beneath the weight of cases seems to grow more distant, as more and more ventilators and medical knowledge are being accumulated.'

'The tricky point is the complicated testing process, which makes it difficult to cut the chain of the virus’ spread. Reservist Brig. Gen. Uri Zeipert has resigned from his role of centralizing the process of improving the testing process. Zeipert – who according to his peers in the air force is a rare example of a combat pilot with a reined-in ego – quickly understood he had gotten stuck inside a useless bureaucratic battle. In the meantime there’s been an effort to try and persuade him to stay on and removing some of the obstacles that stood in his way.
Speeding up testing and enhancing the efficiency of the epidemiological research process for detecting people who have come in contact with those who are ill are becoming more and more critical in light of the easing of restrictions, which raises the chance of infection. But in the absence of an efficient process, a great deal of time passes before officials ascertain those who may be at risk from contact with a newly diagnosed patient.
Even now, the health ministry isn’t doing the utmost to get through this bottleneck. The amount of time it takes to get results from a Magen David Adom test remains a total secret. The IDF has helped to upgrade the ministry’s information system, and improving the flow of information among the various organizations and bureaus involved, but the path is still a long one. Members of the security establishment have joked that it’s easier and quicker to break into health ministry databases than to wait for an orderly transfer of information.'

It's good to know that there are combat pilots with a reigned-in ego, always happy to read about the reigned-in ego by the way.
But what might happen in Israel might happen in other countries where the state and its security branches are eager to use the virus as a perfect excuse to track its citizens more closely.
And once again, no proof that tracking citizens is effective in reducing the spread, even if there was a small proof other considerations should weigh more heavily.
The default function of the state should not be: we want to know everything about our citizens.
Because of the virus it has become more and more difficult to pay cash - an ominous sign.