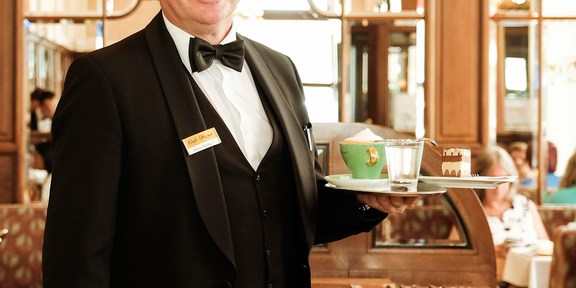 On dying and hospitality - by Philip Oltermann in Berlin, Sam Jones in Madrid, Kim Willsher in Paris and Angela Giuffrida in Orvieto and all of them in The Guardian:

'If there is such a thing as a European way of life, restaurants like Föllerei in Berlin used to give a pretty good flavour of what it would taste like.

In a crammed 40 sq metre (430 sq ft) space tucked away in a side street of scruffy but fashionable Neukölln, the owner, Christiane Föll, has for the last 10 years served up sumptuous Franco-German cuisine, darting between 10 rickety wooden tables night after night to recommend the organic entrecôte, pour another glass of Spätburgunder or share the latest locally sourced gossip.

Since Berlin went into lockdown on 14 March, however, the front door at Föllerei (a play on the German word for gluttony) has remained shut – and it is unclear if it will ever open again.

As European countries nervously begin to extricate themselves from restrictions to curb the spread of Covid-19, shops are beckoning in customers, metro trains are returning to regular service, and even hairdressers are sharpening their scissors.

Only three countries – Austria, the Czech Republic and Italy – have put a tentative date on when restaurants can resume service. As such, almost an entire continent’s gastronomic culture remains in limbo.'

'In France, the cradle of modern European gastronomy, strict lockdown measures will end on 11 May but the government has yet to say when the country’s 240,000 restaurants and cafés can reopen. French media suggested last week that if the outbreak was under control at the end of the lockdown, they may be allowed to open in mid-June.

The government has promised to publish an “operational guide” outlining how restaurants and other outlets can maintain barrier and social distancing rules.

Roland Héguy, the president of the hotel industry union UMIH, said 2020 would be a “lost year” for members.

“It’s regrettable that we are the only sector that has no outlook for the future opening of our establishments, even when we are already working on practical guides on how to do our job while keeping our staff and customers safe,” Héguy said.

On 20 April, 18 of France’s most celebrated chefs published an open letter in Le Figaro warning that the country’s restaurants were “in danger of dying” and calling on the president, Emmanuel Macron, to allow them to open.'

'In Austria, restaurants will be allowed to reopen from 15 May if they adhere to a set of rules, including a maximum number of four adults per table and a minimum 1m distance between groups. Waiters will be required to wear masks while taking orders and serving dishes.

Diners are advised to book tables in advance, to avoid queues and make it easier to trace possible infection chains further down the line.

Many restaurants across the continent are already improvising to adapt to the new reality. Towards the end of a normal April, the terrace at Capitano Del Popolo, a restaurant in the hilltop town of Orvieto, in Italy’s central Umbria region, would be buzzing with customers enjoying early spring.

Instead, chef Valentina Santanicchio is busy cooking made-to-order meals, packing them in boxes and delivering them to people’s homes on her bicycle.'

Waiters with mask, clients without one? It appears to be a typical Viennese joke, and I cannot wait to return to Vienna to be served by a masked waiter.
In a couple of weeks, clients will be able to ask the restaurant if the waiter can wear their favorite mask. Black leather for example. Or a Missoni scarf. Only in upscale restaurants of course.

Take-out will remain in demand for the time being, in Austria especially among families bigger than four.

And then we will see the rise of the naughty waiter: "If you order a bottle of Himbeergeist I will take off my mask for a few seconds."

No, the hospitality industry won't die, it's just remodeling. And we all know, necessity is the mother of opportunity. Not only in capitalism.