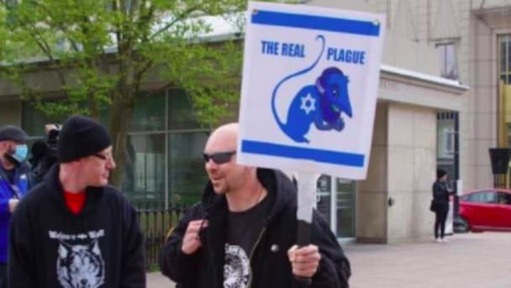 On the red pill - Flora Cassen in Haaretz:

'Dark web communities are already infamous for their hosting and cultivation of the anti-Semitic, white nationalist far right. The perpetrator of the massacre at the Christchurch, New Zealand mosque, Brenton Tarrant, was an active member of 8Chan. The Pittsburgh synagogue shooter, Robert Bowers, posted on Gab his intention to carry out an attack. Neo-Nazi website the Daily Stormer, one of the organizers of the Charlottesville far right rally, moved to the dark web after it was booted off the mainstream internet.
The discussions about Jews’ "responsibility" for the coronavirus are generally riffs on the storied theory of a global Jewish conspiracy for power and domination. Added to that are references to other anti-Semitic theories regarding Jews as poisoners and deliberate carriers of disease, Jews as inveterate economic profiteers and, inevitably, Holocaust denial. The newer element is the idea of coronavirus as a grand plan engineered by the Jews and China together.
In a discussion probably triggered by President Trump’s willingness to entertain the unproven theory that the virus was engineered in a lab in Wuhan, China, an anonymous poster (or "anon") attempted to reveal the "real" viral genesis. He noted as fact that the coronavirus came from a Chinese lab but that it was not created by the Chinese: "The kikes get the credit for that one. It was the kikes. It's ALWAYS the kikes."
The idea of the Jews pulling the strings but using proxies for deniability and to amplify their power is a core plank of far right thought. Many anons’ sense of Jewish power is so inflated that they believe Jews developed the virus not only to spread suffering and disease, but also to "knock down" China herself.'

'But what is the far right rationale for why the Jews created and unleashed the coronavirus? According to one anon – who, like many others, uses the triple parentheses ((())) to identify Jews – they acted "to consolidate their gains. The red-pill movement is growing, and time is running out for the kikes. (((They))) must cement their power now, while they still have the upper hand."

The "red-pill movement," a form of "awakening" to the "truth" of white supremacist teaching, is a constant topic on these boards. It’s a reference to a 1999 movie starring Keanu Reeves as Neo, a hero who wants to free humanity from the Matrix, a virtual reality in which everyone is trapped. Neo has to choose between taking a blue pill (to continue living in illusions) or a red pill – to enter the world of painful reality. As Morpheus, the father-figure who has revealed the Matrix, explains, by taking the red pill he can show Neo "how deep the rabbit-hole goes."
Taking the red pill is a transformative experience, leading you from darkness to light: "The Matrix is everywhere. It is all around us. It is the world that has been pulled over your eyes to blind you from the truth. A prison for your mind."
Anonymous posters on the dark web constantly reference how the “knowledge” they can now access has the same transformative effect. Once they grasp the “truth” that was hiding behind the lies, there is no going back. That’s known as being "red-pilled." Two major ideas –crucial to understanding the role of anti-Semitism in dark web forums – distinguish the world of red-pilled anons from our own.
The first foundational belief is the Holocaust is a hoax. They call it the "Holohoax," and it goes even further than more familiar forms of Holocaust denial by declaring that any kind of Holocaust remembrance and education are deliberate brainwashing. They claim that there has been a global indoctrination into believing that the genocide of the Jews really happened.
For red-pilled anons, what is required to get out of that brainwashed state is a "Holocaust deprogramming course." Outside of the dark web, but a direct continuation of it, the "Holohoax" terminology is used as a slur to be spray painted on synagogues and other Jewish institutions.'

Different types of the red-pill movement can be found almost everywhere. Not all of them openly antisemitic, but where the conspiracy theory grows, antisemitism is never far away.

But the moment a belief system names an enemy, believes passionately in an enemy and the definition of this enemy is based on ethnicity, nationality, religion you know what the true face of this belief system is: biological racism, antisemitism, fascism.
Unfortunately the virus is igniting the fire of these ugly passions.