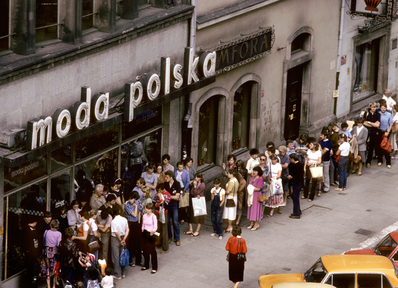 "Bus No. 122 was going down Belvederska Street. The passengers sat in silence. Of late, people tend to sit in silence on buses. None of the arguments, none of the jokes you used to get. The bus halted sharply at a crossing but even that failed to provoke a comment. A ribbon of army transporters and lorries stretched out in front of us while the bus waited. Guns wobbled under tarpaulins. A Gazik brought up the rear. As soon as the convoy had passed, the bus moved forward cautiously over the icy asphalt. It passed the ‘colony’, a row of buildings of differing heights surrounded by a wall, housing Russian diplomats and advisers.

‘Walled themselves in, the Russkis!’ said a nondescript young man in a fur hat which had seen better days. ‘Must be afraid of an attack.’ His voice was surprisingly loud and penetrating. He ended with a crazy sort of giggle.

A few passengers looked at the walled quarters. Nobody spoke.

‘What was that you said?’ Another voice, from the front of the bus. A fat squat man. Good fur hat, shiny face, clean shaven. He elbowed his way towards the young man, who was standing by the middle door.

The young man looked anxious. He glanced instinctively at the door.

The driver was watching the incident in his mirror. He jammed on his brakes suddenly, then accelerated just as abruptly. The standing passengers were precipitated to the front, taking the fat man in the fur hat with them. He resisted, but was swept along by the crush of bodies and pinned to the glass partition dividing the driver’s cab from the passengers.

The driver smiled, but then the smile vanished at once. He drove on, concentrating on the icy surface. He looked tired and unshaven.

The fat man in the fur hat struggled to get free but to no avail. He gripped the back of a seat with both hands and tried to pull himself up. He managed to move a bit but couldn’t pass one of the seats reserved for the disabled. The cripple sitting there held his stiff leg fully extended across the aisle.

A request stop. The impetus of all those bodies once again immobilized the fat man in the fur hat. The driver pressed a button. The automatic doors opened with a hiss. The middle door first. The nondescript young man, who was standing right by the steps, jumped out nimbly.

The fat man in the fur hat laboriously fought his way towards the door at the front. He was at some disadvantage. A raging, red-faced bulldog. The driver watched him coolly, waiting politely. The fat man made it in the end. Once outside he peered helplessly in every direction. The young man was nowhere to be seen. He took down the number of the departing bus."

Read another story by Nowakowski here.

It's printed in the issue called Dirty realism. Lots of post-war Polish fiction could be labeled dirty realism but this vignette is a striking example of the well known mixture of fear, civil courage and ghastly civil servants working for a dying state.