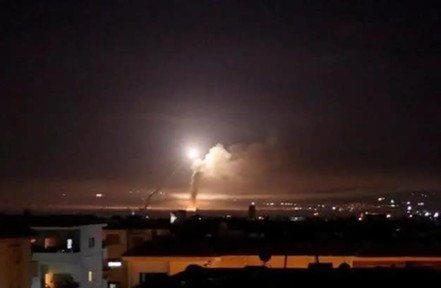 On red lines, Corona and the war that goes on - Amos Harel in Haaretz:

'An airstrike attributed to Israel on Monday night in the Aleppo area, in northern Syria, appears to be significant, looking at its scope, its relatively distant location and the target itself – a Syrian agency said to be a vital component of Iran's efforts to arm Hezbollah.
According to reports in Arab media outlets, the site that was targeted belongs to Syria's Scientific Studies and Research Center, the country's most important defense industry agency, responsible for developing weaponry, including chemical and biological weapons.

These days, the reports from Syria arrive several times a week. According to the Syrian media, the Israeli Air Force is constantly attacking various military targets in large swaths of the country: arms storehouses, weapons plants, surface-to-air missile batteries, observation posts along the Israeli border. Every member of the Shi’ite axis led by Iran – the Iranian Revolutionary Guards, foreign Shi’ite militias, Hezbollah and units of the Syrian army – is in the line of fire.'

'At first, the strikes mainly targeted convoys smuggling Iranian arms to Hezbollah in Lebanon via Syria. Then, starting in late 2017, attacks on bases serving the Revolutionary Guards and Shi’ite militias began, as part of the effort to prevent Iran’s military entrenchment in Syria.
The attacks were initially deliberately shrouded in an effort to keep the Syrian regime from tightening its alliance with Iran and Hezbollah while not embroiling Israel in Syria’s civil war. But over the last two years, Israel began scattering broad hints.
The coronavirus apparently dictated a change in strategy. In March, almost no attacks were reported. But in April, the Syrian media reported attacks once or twice a week in eastern, central and southern Syria.
This time, Israel hasn’t said much about these reports. In any case, neither the Israeli nor the foreign media are paying much attention to events in Syria; the coronavirus dominates their agenda. From Israel’s point of view, that may actually be a plus.
These attacks have caught the Iranian axis at a moment of relative weakness. Iran’s entrenchment in Syria and its aid to Hezbollah were the flagship project of Gen. Qassem Soleimani, the commander of the Revolutionary Guards’ Quds Force. In recent years, the greater Soleimani’s influence around the Middle East became, the more his efforts to smuggle arms to Hezbollah and build bases in Syria increased. Soleimani evidently insisted on continuing this despite Israel’s airstrikes.

But in early January, the Americans assassinated Soleimani shortly after his plane landed in Baghdad. His replacement, Gen. Esmail Ghaani, discovered that his predecessor’s shoes were a bit too big for him. Ghaani doesn’t share Soleimani’s superstar status. He’s having trouble imbuing the ranks with a fighting spirit, even if we take into account the pressure Iran and Hezbollah have been under lately.'

'Under cover of the coronavirus, the Netanyahu government seems to have given Israel’s military chief, Aviv Kochavi, a blank check to continue the airstrikes and even intensify them. Given the geographic dispersion of the reported attacks, this war is being waged in every theater – both at the front, i.e. the Syrian-Israeli border in the Golan Heights, where outposts Hezbollah set up via its local partners are being bombed, and at bases deep inside Syria, far from the Israeli border.
Israel is walking on the brink and waiting to see how the enemy will respond. Will Assad hint to Tehran that it’s time to fold, or will the Iranians themselves search for an honorable exit and reduce their presence in Syria due to the increasing military pressure? Or will there be retaliation against Israel? One limited retaliatory action occurred in mid-April. Two days after a Hezbollah vehicle was attacked, allegedly by Israel, just over the Syrian side of the Syrian-Lebanese border, someone cut through the fence between Israel and Lebanon in three places. Though the border wasn’t crossed, this seemed like a signal to Israel by Hezbollah that the Lebanese group also has red lines.'

Under cover of the virus the war can be fought discreetly - but the enemy still has its red lines, otherwise there would be no enemy.

Now we will have to wait and see which red lines cannot be crossed.

But Israel's objective seems to be clear: to disassociate Iran from Syria and to weaken Hezbollah, already considerably weakened.