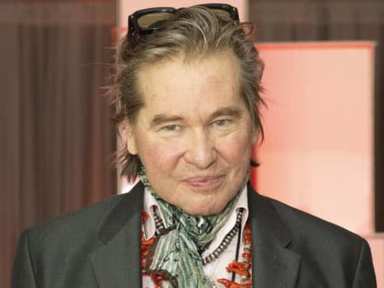 On Val Kilmer, cancer, faith and grades of surrender - a beautiful article by Taffy Brodesser-Akner in NYT:

'The next day, Kilmer sat at a conference table in HelMel and opened up a red Igloo cooler and began to mix liquids together from various canisters before putting them into a syringe. He opened his shirt, uncapped his feeding port and injected the food into a tube. It was lunchtime.
He has no vices anymore. He watches all the food shows — “Top Chef,” “Chef’s Table,” “Ugly Delicious” — yearning for the time he’ll be able to eat again, though it has been years and he’s not sure how much longer it will be. When it is, though, he said, making his arms into a food-shoveling gesture, “I’m going to look like Orson Welles.” He’s 61 now. He is still so handsome. His hair is still blond. His eyes are still the unimaginable green of Oregon grass right after the rain. His jaw is still the main event — the nasolabial area of his cheek bookending the inferior jowl so that his superior jowl appears sunken and his face takes on romantic geological proportions. He was wearing a very heavy turquoise and coral necklace that his mother, who died last year, wore for 20 years straight, along with her turquoise bracelet.
He was never scared during his medical treatment, he told me; he never panicked. Right as he was graduating from high school, his younger brother, Wesley, who had received a diagnosis of epilepsy, drowned in the family’s Jacuzzi. Wesley had been a “supergenius,” he said, a gifted filmmaker who made stop-motion animation ahead of his time. But Kilmer still talks to Wesley. Wesley shows up in his office, and they hash things out or trade ideas. His mother has appeared to him lately, too, as if “she’s at a party, saying how happy she is to be with her husband again and Wesley, my little brother, so happy.” Death isn’t death in Christian Science. It’s simply that humans have limitations, and one of them is that we perceive people only through our five senses. When a person dies, they aren’t gone. They are just not showing up in our senses anymore. So if a Christian Scientist prays and still dies (according to standard definitions of death), it doesn’t mean the prayer didn’t work. As Kilmer said when he was dressed up as Mark Twain, all prayers work: “It’s just that sometimes we don’t like the answer.”'

One of the better definitions of faith: the fact that we didn't like the answer doesn't mean that the prayer has not worked.
Or in other words, what does "to work" mean in the context of prayer? Kilmer gives a Kierkegaardian response.

And one more reason to watch "Heat" again.