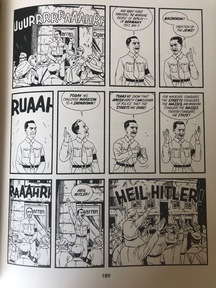 'The dirty secret about graphic novels is how fast they read; it’s rare for one to require more than a day or two to finish. (“I hated the lifetime of pain and struggle it took to create a thing that anyone could read in an hour,” sighs the cartoonist in Matthew Klam’s novel “Who Is Rich?”) Strange as it sounds, one of the virtues of “Berlin” is how it resists completion. It took me weeks to get through, at times backtracking in order to clarify who was who, always returning at last to a greater appreciation of Lutes’s vision and humanity. In the last pages, the book pitches suddenly, violently forward through time, as though to meet us — an ending so electrifying that I gasped,' Ed Park wrote in NYT in November 2018 about the graphic novel "Berlin" by Jason Lutes.

Last night my girlfriend gave me "Berlin" after it was finally being reviewed in a Dutch newspaper. (NRC Handelsblad.) It was unavailable in bookstores, she had to order it directly from the Canadian publishing house, but it arrived surprisingly fast in Amsterdam.

The last graphic novel that made a huge impression on me was 'Today is the Last Day of the Rest of Your Life' by Ulli Lust.

"Berlin" might be as good as 'Today as is the Last Day of the Rest of your Life'.

On one of the first pages I read: 'Well, Köln is sizable, but is it a city in the modern sense? Our destination is certainly such a place. I would think a degree of apprehension normal for a first-time visitor."