You are a chicken

The continuation of a slaughterhouse

My godson, presently in Bolivia, has for reasons unknown to me, developed an appetite for violence and fighting.
Since he saw a chicken being slaughtered he likes to slaughter chickens and human beings. Only after slaughtering at least twenty of them he pauses and he says: “It’s just a game.” Bob the Builder is still his hero, but lately he started referring to himself as Mickey the Fighter. Often he says: “I’m Mickey the Fighter and you are a chicken.” Or: “I’m Mickey the Fighter and you are a soldier.” He knows I have been to the soldiers.
The weapon you see him carrying is not his. It belongs to his second cousin.
He is not allowed any weapons, nevertheless the slaughtering continues. 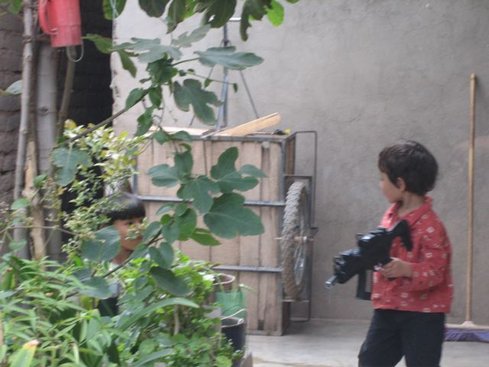