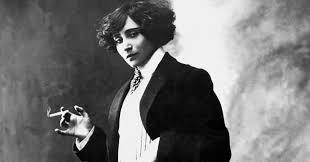 Vivan Gornick writes in “Unfinished business – Notes of a chronic re-reader” about Colette, among other writers.
She is full of admiration and love for Colette, but her judgment is harsh, I guess that’s what re-reading can do to a reader, and an author.

“What young woman today could read Colette as I read her when I was young? The question answers itself.”

But she ends the chapter on Colette with these words:

“Upon re-reading the ‘Chéri’ books I now realized that the anomie in Chéri himself is at the heart of Colette’s concern. Anomie is behind the intensity of Love with a capital L. Anomie is why her characters have all buried themselves in eroticism. It is out of anomie that the relation to sensual feeling becomes so all-enveloping it leads Colette to label the shudder of orgasm ‘the little death.’

Anomie and desire: a specialty in French literature that be traced back at least as far as the 1792 publication of ‘Les Liaisions Dangereuses” and carried forward at least as far as the mid-twentieth century work of Marguerite Duras. For, after all, what is the work of Marguerite Duras if not an ongoing study of desire linked intimately to self-estrangement? With one important complication: as Duras is writing well into the Freudian century, it was impossible for her to not trace the origins of emotional disconnect to the family romance gone wrong.”

Without anomie Love with capital L becomes something else, adult love you could say, but that’s too pious, one could easily forget that the responsible love is a gain and a loss as well.

The appeal of desire is closely connected to necessary self-estrangement.

Superficially it might look as if desire is about conquering someone else, I would say it’s as much about getting rid of someone: your old self.