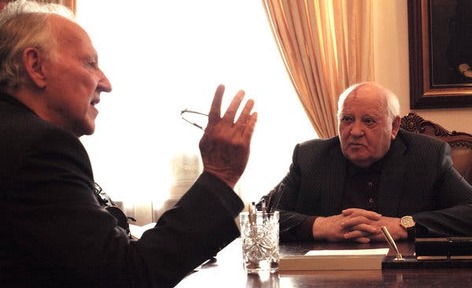 On Gorbachev and Herzog – Benjamin Nathans in NYRB:

‘But it was not just his relative youth (he joined the Politburo at age forty-nine) that stood out. The most extraordinary thing about Gorbachev was his enduring idealism, specifically his vision of what socialism could be and what it could do for the world. The Soviet Union in the 1980s was a country saturated with cynicism, where most people, certainly most adults, understood that the Marxist-Leninist clichés mouthed by Communist Party officials were little more than lip service to an ossified ideology. Gorbachev somehow remained a true believer. In one of the most dramatic press conferences of his career, having just returned to Moscow after being held hostage in Crimea during the attempted coup d’état of August 1991, he delivered the closest thing to a credo one was likely to hear from a Soviet leader: “I am a staunch adherent of the socialist idea…an idea that contains values worked out over the course of centuries, that draws on the achievements of Christianity, the idea of a just society, a better world.” It’s a pity that Herzog didn’t see fit to ask Gorbachev how he held on to such idealism as he ascended the rungs of the Communist Party, a world of backstabbing, back-scratching, patronage-seeking careerists. Gorbachev’s biographer William Taubman, who served as a consultant for the film, has argued that his idealism was innate to his character and preserved by his rural upbringing against the pervasive disenchantment of the USSR’s double-speaking urban sophisticates. That’s a good start but hardly resolves the mystery. Taubman goes on to note that “Gorbachev made it to the top by seeming to be an ideal product of the Soviet system…. What [he] concealed was that the Communism he believed in wasn’t the carcass of Stalinism over which [Brezhnev and other leaders] presided.” His dream was to make the Soviet system “live up to what he deemed its original ideals.”6 The attempt to realize that dream instead triggered the system’s disintegration.
Gorbachev made Memorial’s founding possible, and not just in the broad sense of opening up Soviet society to a more honest reckoning with its history. At Sakharov’s funeral in December 1989, the Soviet leader turned to Elena Bonner, his widow and fellow dissident, and said what statesmen are supposed to say in such situations: “What can I do for you?” Bonner asked him to allow Memorial to register as an independent citizens’ organization or, as we would say, an NGO—a category that did not then exist in the USSR. Gorbachev said he would, and he kept his word.
At eighty-nine, Gorbachev now physically resembles the elderly Politburo members whom he joined as a relatively young man four decades ago. He suffers from diabetes, needs help walking, and occasionally slurs his words, often slipping back into the southern lilt of his birthplace in Stravropol. An unrepentant idealist, he urges the world to embrace disarmament, social democracy, and environmental protection. When Herzog asks him what he would like to be written on his gravestone, he mentions the inscription chosen by a friend: “We tried.”’

I saw ‘Meeting Gorbachev’ a couple of years ago in Film Forum, the movie impressed me, (see: here), but Benjamin Nathans is right, perhaps Werner Herzog was too much in awe of Gorbachev to ask the most important questions.

The following is not only true for the old Sovjet gerontocracy but for most if not all politics – we are experiencing an American gerontocracy right now – the question is how to remain idealistic in ‘a world of backstabbing, back-scratching, patronage-seeking careerists.’

In other words, what does it take to be an effective idealist? A little bit of backstabbing and back-scratching appear to be mandatory.