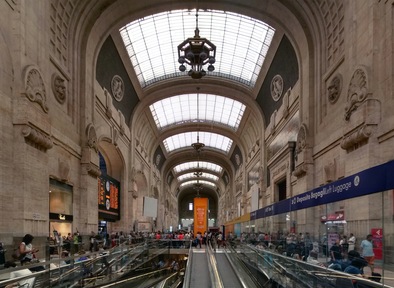 On Italy and its monsters – Jeremy Cliffe in The New Statesman:

‘At Milano Centrale, commuters and long-distance passengers are now well drilled in the new procedures. A one-way system for passengers is marked out with barriers and arrows on the floor. Heading for my onward train I pass a temperature scanner before I reach the platform, where stewards dole out bags containing rubber gloves, headrest covers, antibacterial gel and masks. The carriages, too, are one-way; with an “entry” and an “exit” door. The casual, unfussed Italy of past visits feels like another age.
My train flies out of Milan, through graffitied underpasses, along the southbound Autostrada del Sole (motorway of the sun, a postwar employment project) and past the towns and factories of the fertile northern Italian plain. Church towers peek through the morning mist. After Bologna the terrain becomes hillier and, plunging through a series of tunnels, the train pulls into Florence’s Santa Maria Novella station. I get off, store my suitcase and drink a just-barely-acceptable (as it is verging on late morning and this is Italy) cappuccino.
The station is named after the nearby church, built by the Dominican friars during the Black Death to show off their theatrical preachers and win what today might be called “audience share” from the more austere Franciscans. Boccaccio chose Santa Maria Novella as the opening setting of his Decameron, not least because his masterpiece was a collection of novellas and the man liked a pun. I hope to visit the church, but on arriving find it is still shut due to the pandemic. Only its tiny Cappella della Pura is open for prayer. I enter and spend a few moments on a pew marked with signs telling people to sit at opposite ends and to wear masks. Peering through the roped-off door into the main church, I try to imagine Pampinea, Filomena, Neifile, Lauretta, Emilia, Elissa and Fiammetta gathering there amid the horror and pain of the plague and deciding – on the arrival of three strapping fellows – to quit the city for the countryside.
Florence in July is usually a nightmare of tourist hoards. But this year the rattle of suitcase wheels on cobbles, the selfie sticks, the fleets of e-scooters careening though crowds are all absent. On the Piazza della Signoria the replica statue of Michelangelo’s David stands unusually unphotographed. It is not an entirely unpleasant way to see the city.
But to luxuriate in the calm feels distasteful. Florence lacks the usual clatter and hubbub of urban Italian life. At the grand Café Scudieri customers do not huddle together at the bar drinking their coffees, clapping each other on the back and exchanging banter. They stand separated, on dots marked on the floor. Out on the square there must be more than a hundred café tables open. Only four of them are occupied. I pass several hotels with their shutters down and chiuso (closed) written on the door. Last year 13 per cent of Italy’s GDP came from tourism. The empty streets and hotels may be nice for occasional visitors such as me, but they spell bankruptcy, unemployment and misery for Italians.
Nothing on my trip through the country stays with me more than the posters, all over Florence, with drawings of the city’s most magnificent sights, its palazzi, its cathedral and its gardens, glimpsed only partially through open windows. The message from the municipal government is: exercise caution or once again this is all you will see of il bel paese, the beautiful country.’ (…)

‘The pandemic will accentuate this contrast. Though southern Italy was barely touched by Covid-19, Naples went into lockdown like the north (Neapolitans grumble that had the south been the epicentre, it alone would have been quarantined) and did so with verve and good humour. Families rallied together, traditional songs were sung from windows and, in a scene much-shared on social media, a DJ installed turntables on his balcony and led his street in a rendition of Frankie Valli’s “Can’t Take My Eyes Off You”.
Yet it is here in Italy’s south that the long-term pain will be the greatest. About a third of Neapolitans work informally, so have not been covered by the furlough scheme. Whole families have been pushed into destitution. Italian TV news now often shows queues at soup kitchens and food banks in the city to illustrate the growth of the so-called nuovi poveri, or new poor.
I have come to Naples intending to visit two such food banks, but find both closed. Instead, for some historical perspective, I decide to follow the traces of the city’s devastating 1659 plague, which halved its population and began its long decline. Squares in the old centre still bear the baroque obelisks built to give thanks when their districts were finally freed of the outbreak. The most famous, in the Piazza San Domenico Maggiore, is like a giant, ornate candlestick swirling and fluting upwards. I hike up towards the Castel Sant’Elmo looming over the city. The stairway is deserted, thick with weeds and broken glass, and dotted with rambling purple oleanders and little shrines set into the hillside. At the top my plans are once again foiled – the Museo di San Martino housing Domenico Gargiulo’s nightmarish painting of the city during the 1659 plague is still closed from the lockdown – but I am compensated with the best possible view of the city.’

‘Many in Italy agree that the pandemic has brought out much of the best and some of the worst in their country. But few predict that it will greatly change its direction, other than to accelerate it on an existing course. That assumption may be true. Or it may be fatalism. As it is not clear which, one might as well challenge it.
That is partly a job for Europe as a whole. Italy in many ways is Europe. It is the country to which the European project traces more of its roots than any other, where the EU was born and where many trends that have since swept the continent (not least right-wing populism) first took hold. Its cultural import meant it was ushered into the eurozone in 1999 without meeting all the necessary requirements. And while the euro is not the root cause of the country’s stagnation, Brussels, Berlin and Paris have done too little to complete the monetary union with the fiscal architecture needed to enable Italy to advance within it.
Ultimately, however, it falls to Italians to do battle with their own monsters. That means finding the vigour to ensure that the EU’s recovery plan, which was finally agreed on 21 July, is now put to good use and thus defy northern stereotypes about Italy’s ability to use such support wisely. It means finding the generosity of spirit to avoid scapegoating and culture wars that detract from the country’s problems. It means having the sprezzatura to escape from the despondency that plays too central a role in the country’s mentality. Even if it is just to preserve the very many good things that are still true about Italy – for those things to “stay the same” in Lampedusa’s formulation – change must come to il bel paese.’

You want to save Europe? Save Italy first.
Its monsters are very much European monsters indeed. One easily forgets that fascism wasn’t born in Germany but in Italy.
There was a time that Hitler needed Mussolini.
Just watch Chaplin’s “The Great Dictator”, it’s an excellent summer for this movie.