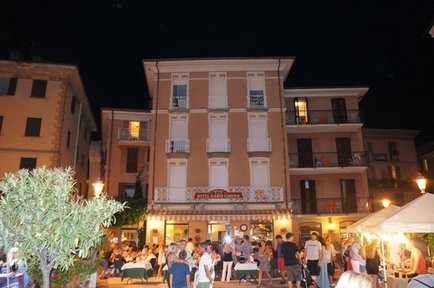 If you take the bus from Sils-Maria to Lugano you pass Menaggio.
One of the last villages in Switzerland is Promontogno, the bus stop there is next to a beautiful two-star-hotel that appears to be slightly in decay, but precisely the minor decay makes it so appealing.
After Promontogno it is almost done with the mountains, in less than two hours you travelled from 6000 feet to 650 feet, it’s suddenly 15 to 20 degrees Fahrenheit warmer, the eternal snow has disappeared, what you get to see is eternal sunshine and a hotel that is named Corona Garni.
It’s good to know that at least Promotogno is nearby. The eternal snow appears to be preferable to eternal summer.