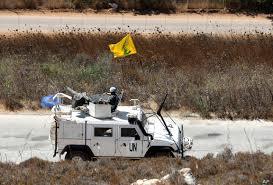 On all sorts of fire – Amos Harel in Haaretz:

‘Kamal Mohsen Jawad, the Lebanese fighter whose death in a Damascus bombing raid sparked the current tension on Israel’s northern border, was not exactly a rising star in the Hezbollah firmament. Jawad, who hailed from the South Lebanon village of Itit, had served in the Shi’ite organization in the past. But a few years ago he was loaned to the relief bureau, a subunit of the Lebanon Corps in the Iranian Revolutionary Guards.

The two Lebanese who were killed a year ago in an Israeli attack in Syria – which triggered tension between the sides last August – had followed a similar track. All in all, Hezbollah apparently does not loan its outstanding people to the Iranians, but rather those it can get along without. But in their death they are reclaimed by the organization, and the secretary general, Hassan Nasrallah, heaps the appropriate honors on them.’

‘It’s at this point that Nasrallah enters the picture. A year ago, in a series of public talks, the veteran secretary general enshrined a “deterrence equation”: His organization will respond from Lebanon for every casualty among his forces in Syria.’

(…)
‘Jawad was not killed deliberately. His death was collateral damage from the attack on the Iranian weapons. And on Monday of this week, the Israeli army kept a Hezbollah squad that crossed the border into Israel in the Har Dov area under surveillance for a long period, and this time, too, Israel opened fire with the aim of inducing the squad to withdraw – which it did, back into Lebanon, with no casualties.
The Israel Defense Forces’ heightened preparedness will continue for the time being. Since the attack in Damascus, and more intensively since the Har Dov incident, the forces and materiel deployed near the Lebanese border and in the Golan Heights – where Hezbollah might also try to mount a response – have been reinforced. Political figures and senior IDF officers have been paying frequent visits to Northern Command and issuing threatening messages aimed at Nasrallah.
It’s too soon to say whether the attempts at deterrence will achieve their purpose, but in the meantime Hezbollah has one achievement to its credit: The entire Israeli defense establishment appears to be in a state of defensive alert, ready to accept its punishment from a guerrilla organization whose capabilities are inferior to those of the IDF by every parameter. The Israeli public, too, is uneasy about the approaching Hezbollah revenge operation, in

a period that is not short of other urgent concerns, and in which the tourist spots in the north remain one of the few escape hatches from the dispiriting coronavirus pandemic. In this case it might have been better to go light on the declarations and make do with the necessary deployment measures, while neutralizing unnecessary background noises.’

‘In any event, the working assumption of Military Intelligence is that the episode in the north hasn’t yet concluded. Nasrallah, for reasons already noted, particularly the deep economic and political crisis in Lebanon, is fearful of a war with Israel at this time. But the organization’s declarations indicate that the account is not yet settled and there may be another attempt at a response in the coming days or weeks.
Another comment is also in order. The decision-making mechanism in Israel is now headed by a person who is in unprecedented distress. Prime Minister Benjamin Netanyahu is waging a rearguard battle against the legal steps that have been launched against him. He is considering the possibility of dismantling the government and calling a fourth election in less than two years, despite the pandemic, and he is consistently fanning the flames in the streets, which this week led to violent assaults by right-wing thugs on demonstrators who are demanding his resignation. That’s a good reason to keep a very close watch on the military considerations of one who is, as Yossi Verter put it in Thursday’s Haaretz, willing to set the country on fire.’

In order to have an effective ‘deterrence equation’ both sides need to respect the equation. And as this article makes clear, this is also a matter of theater, of illusions of a certain quality.