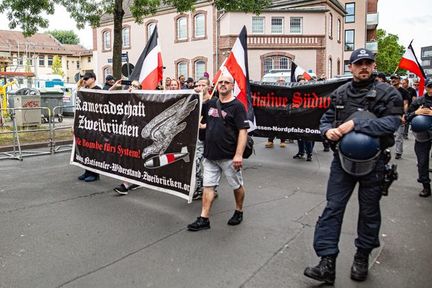 On Germany and the far-right – Katrin Bennhold in NYT: ‘Germany has belatedly begun dealing with far-right networks that officials now say are far more extensive than they ever understood. The reach of far-right extremists into its armed forces is particularly alarming in a country that has worked to cleanse itself of its Nazi past and the horrors of the Holocaust. In July the government disbanded an entire company infiltrated by extremists in the nation’s special forces.
But the Nordkreuz case, which only recently came to trial after being uncovered more than three years ago, shows that the problem of far-right infiltration is neither new nor confined to the KSK, or even the military.
Far-right extremism penetrated multiple layers of German society in the years when the authorities underestimated the threat or were reluctant to countenance it fully, officials and lawmakers acknowledge. Now they are struggling to uproot it.’

‘The shooting range in Güstrow, a rural town in a northeast corner of Germany, sits at the end of a long dirt path secured by a heavy gate. Barbed wire surrounds the area. A German flag flutters in the wind.
“This is where it all started,” Axel Moll, a local decorator and Nordkreuz member with a hunting license and gun cabinet at home, told me when I was touring the area earlier this year.
Mr. Gross, the police officer, was a regular at the range. He had been a parachutist and long-distance reconnaissance officer in the German army before his battalion was absorbed by Germany’s elite special forces, the KSK. He never joined the KSK but knows several men who did.
Another regular was Frank Thiel, a champion in handgun competitions and sought-after tactical shooting instructor for police and military units across Germany.
In the fall of 2015, as hundreds of thousands of asylum seekers from wars in Syria, Iraq and Afghanistan arrived in Germany, the men were appalled. In their eyes, Germany faced a potential invasion from terrorists, a possible breakdown of its welfare system, maybe even unrest.’

‘Much in the file came from publicly available sources. But there were also handwritten notes with information obtained from a police computer.
As they drank coffee at the truck stop, Jan Henrik H. turned the conversation to “the people in the file,” whom he said were “harmful” to the state and needed to be “done away with,” Mr. Schelski later told the police.
Jan Henrik H. wanted advice on how best to transport their captives once they had been rounded up. He asked Mr. Schelski, a major in the state reservist unit, how they could get them past any checkpoints that might be created in a time of unrest. Would uniforms help? Army trucks? After that meeting, Mr. Schelski told the police, he distanced himself from the group.
By then, the intelligence service was already watching. Some eight months after the truck stop meeting, the authorities conducted the first in a series of raids on the homes of several Nordkreuz members.’

‘Three other police officers are being investigated on suspicion of helping Mr. Gross. Asked during the trial, Mr. Gross said he did not remember how he got the ammunition. When I met him, he stuck to that line.
But otherwise he was not shy about sharing his views.
Chancellor Angela Merkel belongs “in the dock,” he said. The multicultural cities in western Germany are “the caliphate.” The best way to escape creeping migration was to move to the East German countryside, “where people are still called Schmidt, Schneider and Müller.” A copy of Compact, a prominent far-right magazine, with President Trump’s face on the cover, lay on a shelf. A selection of the president’s speeches had been translated into German in the issue. “I like Trump,” Mr. Gross said.
As far back as 2009, some fellow police officers had voiced concerns about Mr. Gross’s far-right views, noting that he had brought books about the Nazis to work. But no one intervened, and he was even groomed for promotion.
“There is no danger from the far right,” he insisted. “I don’t know a single neo-Nazi.” Soldiers and police officers are “frustrated,” he told me the third time we met, ticking off complaints about migrants, crime and the mainstream media. He likens the coverage of coronavirus to the censored state broadcaster during Communism. Instead, he says, he has a YouTube subscription to RT, the Russian state-controlled channel and other alternative media.
In that parallel universe of disinformation, he learns that the government is secretly flying in refugees after midnight. That coronavirus is a ploy to deprive citizens of their rights. That Ms. Merkel works for what he calls the “deep state.” “The deep state is global,” Mr. Gross said. “It’s big capital, the big banks, Bill Gates.” He still expects Day X, sooner or later. Riots linked to an economic meltdown. Or a blackout, because the German government is shuttering coal plants.’

It's interesting that, as far as I can judge, the coverage of ‘Nordkreuz’ in NYT has been far more extensive than in the two major German newspapers I read regularly (Süddeutsche and FAZ).

Based on the excellent articles by Katrin Bennhold it’s hard to judge how close ‘Nordkreuz’ could have come to a coup. But given the popularity of the AfD, especially in the eastern parts of Germany where the AfD was often close to becoming the biggest party in the state legislatures it’s conceivable that right-wing extremism has penetrated German society more than we can imagine now.

It remains to be seen whether day X will ever appear.

The NSDAP would never have gotten so far without the frustrated soldiers and officers of Germany who believed they could have won World War I. The devastations and lust for revenge after World War I were crucial for the success of the NSDAP.

I believe that as long as people have more reason to fear the loss of all kinds of security and goods over the temptation of a wild and fairly attractive adventure, revolution, a coup, they will prefer continuity.