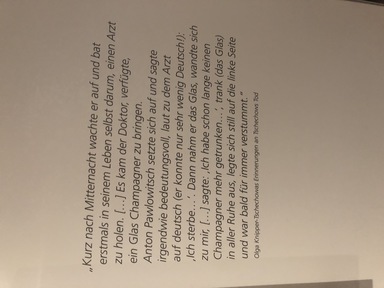 Anton Chekhov died in 1904 in Badenweiler, a spa town between Basel and Freiburg, a small museum in Badenweiler honors his life and his death. As far as dying can be desirable, Chekhov’s death appears to have been dignified.
A doctor came to the hotel room where Chekov was dying, the doctor brought him a glass of champagne.
Then Chekhov told the doctor in passable German: “I’m dying.”
He told his wife: “I haven’t had a glass of champagne in a long time.”
After finishing the champagne, he lay down on his left side and died.
I would prefer to die in the hills above Montreux, but Badenweiler is not a bad place to die in either.