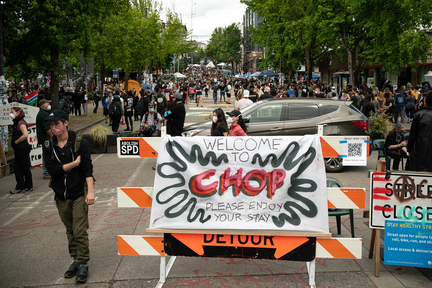 On the reality of anarchy – Nellie Bowles in NYT:

‘Faizel Khan was being told by the news media and his own mayor that the protests in his hometown were peaceful, with “a block party atmosphere.” But that was not what he saw through the windows of his Seattle coffee shop. He saw encampments overtaking the sidewalks. He saw roving bands of masked protesters smashing windows and looting.
Young white men wielding guns would harangue customers as well as Mr. Khan, a gay man of Middle Eastern descent who moved here from Texas so he could more comfortably be out. To get into his coffee shop, he sometimes had to seek the permission of self-appointed armed guards to cross a border they had erected.
“They barricaded us all in here,” Mr. Khan said. “And they were sitting in lawn chairs with guns.” For 23 days in June, about six blocks in the city’s Capitol Hill neighborhood were claimed by left-wing demonstrators and declared police-free. Protesters hailed it as liberation — from police oppression, from white supremacy — and a catalyst for a national movement.
In the wake of the killing of George Floyd by the Minneapolis police, the Black Lives Matter movement is calling to defund the police, arguing that the criminal justice system is inherently racist.
Leaders in many progressive cities are listening. In New York City, Mayor Bill de Blasio has announced a plan to shift $1 billion out of the police budget. The Minneapolis City Council is pitching a major reduction, and the Seattle City Council is pushing for a 50 percent cut to Police Department funding. (The mayor said that plan goes too far.)
Some even call for “abolishing the police” altogether and closing down precincts, which is what happened in Seattle.
That has left small-business owners as lonely voices in progressive areas, arguing that police officers are necessary and that cities cannot function without a robust public safety presence. In Minneapolis, Seattle and Portland, Ore., many of those business owners consider themselves progressive, and in interviews they express support for the Black Lives Matter movement. But they also worry that their businesses, already debilitated by the coronavirus pandemic, will struggle to survive if police departments and city governments cannot protect them.’

‘Many are nervous about speaking out lest they lend ammunition to a conservative critique of the Black Lives Matter movement. In Portland, Elizabeth Snow McDougall, the owner of Stevens-Ness legal printers, emphasized her support for the cause before describing the damage done to her business.
“One window broken, then another, then another, then another. Garbage to clean off the sidewalk in front of the store every morning. Urine to wash out of our doorway alcove. Graffiti to remove,” Ms. McDougall wrote in an email. “Costs to board up and later we’ll have costs to repair.” The impact of the occupation on Cafe Argento, Mr. Khan’s coffee shop on Capitol Hill, has been devastating. Very few people braved the barricades set up by the armed occupiers to come in for his coffee and breakfast sandwiches. Cars coming to pick up food orders would turn around. At two points, he and his workers felt scared and called 911. “They said they would not come into CHOP,” said Mr. Khan, referring to one of the names that protesters gave to the occupied Capitol Hill area. “It was lawless.”’

‘The lawsuit by the small-business owners, filed by the firm Calfo Eakes on June 24, seizes on such language, pointing out that the city knew what was happening and provided material support for the occupation.
Matthew Ploszaj, a Capitol Hill resident, is one of the complainants. He said his apartment building, blocks from Mr. Khan’s shop, was broken into four times during the occupation. The Seattle Police were called each time and never came to his apartment, according to Mr. Ploszaj. When he and another resident called the police after one burglary, they told him to meet them outside the occupation zone, about eight blocks away. He and other residents spent nights at a friend’s house outside the area during the height of the protests.
The employees of Bergman’s Lock and Key say they were followed by demonstrators with baseball bats. Cure Cocktail, a local bar and charcuterie, said its workers were asked by protesters to pledge loyalty to the movement: “Are you for the CHOP or are you for the police?” they were asked, according to the lawsuit.’

‘These days, storefronts in the neighborhood remain boarded up, covered in Black Lives Matter signs and graffiti. Demonstrators still hold evening protests, albeit smaller and quieter than before. But the businesses remain on edge.
“This is an ongoing crisis,” Mr. Donner said on Tuesday. “Protesters are apparently staying until they get some of what they want. No one knows what level of city cooperation will be enough for them.” But the area is slowly going back to its old normal. The park and playing fields have been cleared, and police officers have returned to the streets. An apartment building that opened earlier this summer is finally attracting prospective tenants.’

Read the article here.
The state monopoly on violence is rarely benign, but the absence of this monopoly is most often even less benign. In other words, it’s Hobbes all over again.

And one could argue that in the US the state monopoly on violence is not really a monopoly, but that’s not what this article is about.

What this article emphasizes is that if the government (local or federal government) fails to protect the property rights of business owners and/or citizens, private militias will appear to protect business owners and citizens for a small or not so small fee. So you are double taxed.
Defund the police is in reality an open invitation to the so-called free market to take over.
Which is not to say that the police should not be reformed.