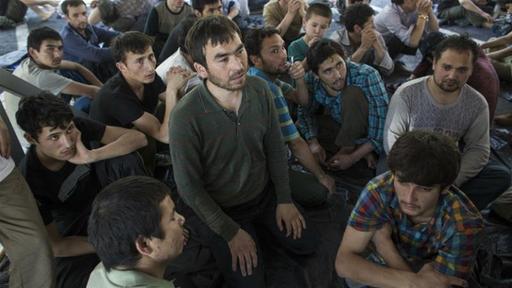 On forced sterilization and other forms of oppression - Emma Graham-Harrison and Lily Kuo in The Guardian:

‘A teacher coerced into giving classes in Xinjiang internment camps has described her forced sterilisation at the age of 50, under a government campaign to suppress birth rates of women from Muslim minorities.
Qelbinur Sidik said the crackdown swept up not just women likely to fall pregnant, but those well beyond normal childbearing ages. Messages she got from local authorities said women aged 19 to 59 were expected to have intrauterine devices (IUDs) fitted or undergo sterilisation.
In 2017, Sidik was 47 and her only daughter already at university when local officials insisted she must have an IUD inserted to prevent the unlikely prospect of another pregnancy. Just over two years later, then aged 50, she was forced to undergo sterilisation.
When the first order came, the Chinese-language teacher was already giving classes at one of the now-notorious internment camps appearing across China’s western Xinjiang region.
She knew what happened to people from Muslim minorities who resisted the government, and a Uighur language text message she shared with the Guardian, which she said came from local authorities, made the threat explicit.’

‘Details of China’s sweeping campaign of repression against Uighurs and other Muslim minorities in Xinjiang have leaked slowly out of the tightly controlled region, but there is increasing evidence of efforts to slash birth rates, which some experts have called “demographic genocide”.
This has included forced birth control and sterilisation, fines and even prison sentences for those considered to have too many children, a recentAssociated Press investigation found.
In the mostly Uighur regions of Hotan and Kashgar, births collapsed by more than 60% between 2015 and 2018 – the last year for which government data is available – the AP found. Nationwide over the same period, births fell only 4.2%.
This is the period when Sidik was forced to have the IUD fitted, despite her age and insistence that she did not want any more children.
The IUD caused heavy bleeding, and she paid to have it removed illegally. But later in 2018 a routine check found it was missing and she was forced to have a second device installed, and then a year later forced to undergo sterilisation.

“In 2017, just because I was an official worker in a school they gave me a wider choice to have this IUD or sterilisation operation. But in 2019 they said there is an order from the government that every woman from 18 years to 59 years old, has to be sterilised. So they said, you have to do this now,” she said.’

‘Sidik came from a family that would once have been considered a model of assimilation by local authorities, speaking fluent Chinese, working at a government school and following government exhortations to only have one child.
She initially dismissed reports of forced sterilisations and mass detentions from other parts of Xinjiang as something that happened to troubled communities. “We felt compassion, but it was some faraway story, not something that will happen to us.” But the long shadow of ethnic oppression may have saved her life. She was born into the turbulence of the Cultural Revolution, and her mother listed her as an Uzbek, even though she has always considered herself a Uighur, and that was the official ethnic identity of others in her family.
Permission to leave China is given only rarely to Muslim minorities from Xinjiang these days, and almost never to Uighurs. She left China in late 2019, and never expects to return. Her husband, a Uighur, applied for a permit to travel with her. Authorities told him: “Don’t even dream about it.”’

Once again, it’s proven that even being ‘a model of assimilation' will not protect you from oppression or ‘demographic genocide’.
And we are too busy with other problems to care about the Uighurs. A small mistake nearby appears to be more worthy of your moral outrage.