It is in their blood 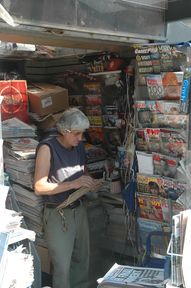 My newspaper guy greeted me this morning with the words: “Did you vote?” “No,” I answered. I wanted to add: “I’m not allowed to vote, at least not in the US.” But my newspaper guy went on: “I voted, I voted for Hillary. I’m a Democrat. I don’t like Obama. You know why? Deep inside he is a Muslim. And you cannot trust a Muslim. It is in their blood. They can’t help it. I’m a Hindu from India, you know how many Hindus the Muslims killed?” My newspaper guy is a respectable and intelligent man.
I wondered why my mother who is susceptible to an argumentation like this has not come up with the idea that Obama is a Muslim.
“Think about it,” said my newspaper guy.
I promised to think about it.
Avoiding conflict is an important task in life.