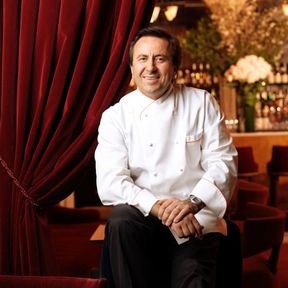 In the dining section of Wednesday’s Times Jeff Bell writes about anxiety in restaurants: “Mr. Kant is a 24-year-old research assistant living outside of Boston who has obsessive fears of contamination. (He first came to my attention when I read a memoir he wrote about living with obsessive-compulsive disorder.) Last year he visited a Chinese restaurant with several friends, one of whom pointed out that their silverware was spotted and seemed dirty. Mr. Kant collected all the utensils at the table and attempted to sterilize them by holding them above a small flame at the center of a pu-pu platter, quickly attracting the attention of their waiter.”

Once I had dinner with a woman. She ordered a salad without a dressing, and managed to not eat the salad. This I have been told is fairly common.
A couple of years ago I invited a waitress for dinner.
First she told me she had nothing to wear. So I bought her a dress. (This was my decadent period.) Then she insisted that she didn’t have shoes to go with the dress. So I bought her a pair of shoes.
After that we went to Boulud, a famous restaurant in New York City. When the soup arrived she complained about the spoon. The spoon was too big. Shortly after that she spilled champagne over her new dress. She went to the bathroom to clean her dress and didn’t come back.
After thirty minutes another guest (a woman) came to my table and said: “Your girlfriend is standing naked in the ladies room.” This was probably not a sign of an obsessive-compulsive disorder.
But what was it? Now almost ten years later I’m still not sure.