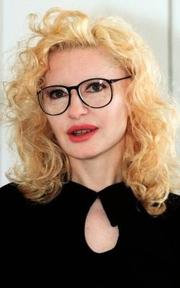 ‘"All too many men still seem to believe, in a rather naive and egocentric way, that what feels good to them is automatically what feels good to women."
Such terse pronouncements made Shere Hite - a sex researcher who died this week at the age of 77 - both a feminist hero and a controversial figure in 1970s America.
Her pioneering work The Hite Report upended prevailing notions about female sexuality.
The book, which came out in 1976, laid out the views of 3,500 women on sexuality and the female orgasm. It challenged many male assumptions, and was derided by some, including Playboy, which dubbed it the "Hate Report".
She endured intense and lasting criticism in the US, and eventually renounced her American citizenship in 1995.’

‘The Hite Report: A National Study of Female Sexuality became a huge international bestseller, totalling 50 million copies worldwide.
Thousands of contributors set out the pleasures and frustrations of their sexual lives in the work. More than 70% of the women interviewed said they could not reach orgasm through penetrative sex with men alone, and needed clitoral stimulus to reach climax.
"I was the only sex researcher at the time who was feminist," she told the Guardian in 2011. "I tried to extend the idea of sexual activity to female orgasm and masturbation."
Feminist writer Julie Bindel said that Shere Hite's "groundbreaking" work "put women's sexual pleasure first and foremost for the first time ever".
"In many ways she began the real sexual revolution for women," she told the Guardian.
But the work generated a huge backlash. Some accused her of hating men, while others said she was helping break apart families at a time of rising divorce rates.
The controversy around the Hite Report and her later works - for which she received death threats - caused her to leave the US and move to Europe, spending time in Germany and the UK. She renounced her US citizenship in 1995.’

Read the article on bbc.com here.

I’m afraid that a new Hite report will show some progress, but not as much as some would have hoped for. And then again, the question is how do you define progress?

The NYT wrote in an obituary: ‘At the same time, the rising Christian right saw her championing of women’s sexual pleasure as contributing to the dissolution of the family.’