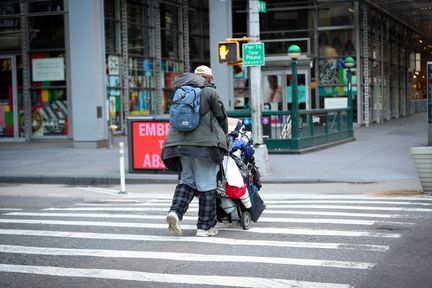 On different sorts of outdoor dining - Ginia Bellafante in NYT:

‘Hell’s Kitchen, though, has long been a repository for social maladies — strung-out junkies hanging around the Port Authority, methadone clinics, the pedestrian dead zone at the entrance to the Lincoln Tunnel to New Jersey. Before coronavirus, Mr. Accardi could handle that — eating happened inside, anyway, at a remove. Now the situation had become untenable.
The pandemic has, in effect, created bitterly competing demands for our compassion, pitting need against need. A fire put out in one place creates the eruption of another somewhere else. “We are limited to seven tables,’’ Mr. Accardi said, explaining Covid restrictions for outdoor dining. “So even if I am at full capacity — and I’m one of the busiest guys on the block — I can barely pay my labor costs, let alone rent.”’

‘Why, he wondered, should his neighborhood have to bear so much of the burden of various mismanaged crises? How was it that the Upper West Side could shout and so quickly get heard? This week Mayor Bill de Blasio decided to relocate 300 homeless men from a hotel, The Lucerne, on West 79th Street, a move that followed an uproar from some in the community who galvanized, hired a lawyer and threatened to sue the city if the newest occupants of the Lucerne were not dispatched elsewhere. The mayor said that he had visited the Upper West Side and that and what he saw “was not acceptable and had to be addressed.” As it happened, the move compelled a backlash to the backlash, as others in the community coalesced to express outrage over the apparent capitulation. “I am devastated to see the city government treat these shelter residents as chess pieces,” Corrine Low, a founder of a group called the UWS Open Hearts Initiative, said in a statement, “who can be moved around the board based on the whims of the rich and powerful.’ Mr. Accardi’s petition — which opened with the lines, “Demand your right to quality of life in Hell’s Kitchen! Close the homeless shelters in our neighborhood now! You can sign privately’’ — did little to invite sympathy and evoked a similar response.
Not long after the petition circulated, the Holy Apostles Soup Kitchen, in Chelsea, called out its harmful rhetoric and asked for a community-led effort to help mitigate the catastrophes of homelessness. But it also acknowledged the despair of so many who worked in the restaurant industry, some of whom were now forced to rely on Holy Apostles’ services.’

‘The stretch of Ninth Avenue below 42 Street and north of Chelsea has a storied place in the city’s food culture. The local butcher, Esposito, has been there since 1932. International Grocery is a beloved Greek market. In April, Empire Coffee succumbed to the pandemic and closed after 112 years.
Restaurants and shops remain unglamorous even as newly constructed high-rise apartment buildings have come to dominate the Far West Side. As Chelsea has given itself over to $10 million condominiums, Hell’s Kitchen became the center of a middle-class gay life in New York. Even with the arrival of Hudson Yards and its fantasyland conception of wealth several blocks west, this is one of the very last patches of Manhattan that still feels unpolished, true to something of the past — a culture worth preserving.’

Outdoor dining is a blessing for those who can afford it, probably for NYC itself, but who wants to be live among shelters for the homeless? Apparently not too many, even if the shelters were hotels not too long ago.

And is the unglamorous culture of the old New York worth preserving? Sure, sooner or later we fade away or we end up as museum pieces.
A modest proposal: turn the shelters into museums – with COVID-regulations of course – the shelters' residents are already treated as chess pieces, they would be better off as valuable art. Living art. Dying art. Not human I hear you say? The reality is less human, you just don’t have to watch it.