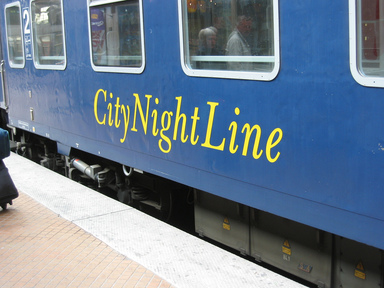 I believe Isaac Bashevis Singer once said that it was an enormous help to his fiction that people could look him up in the phone book of Manhattan.
I’m not in the phone book of Manhattan, but from time to time I’m being found.
Tonight I had dinner with two ladies I hardly know.
“There is comfort in danger,” says Adam Phillips. But as is widely known there is comfort in strangers as well.
One of the ladies told me she had a friend who was working on the City Night Line, the night train from Zurich to Amsterdam.
She was living in the Dutch city of Arnhem and from to time she would go to the station to wave to her Swiss friend on the City Night Line.
If she had time she would travel on the City Night Line from Arnhem to Amsterdam and back to talk to her friend.
The relationship never became romantic.
As a lover of trains in general, and Swiss trains specifically, this anecdote impressed me.