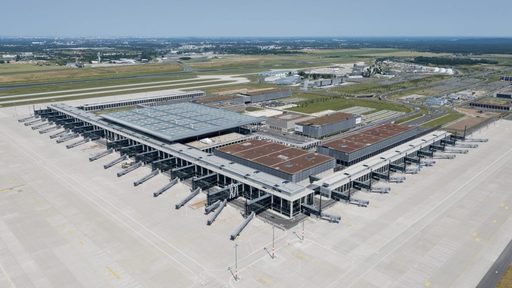 And now finally some comic relief – Katrin Bennhold in NYT on BER:

‘The litany of engineering blunders, corruption scandals and lawsuits that have plagued what was once Europe’s biggest building site have chipped away at the story Germany likes to tell about itself as a model of efficiency and good government.’

‘Under construction for 14 years, the airport is nine years past its original opening date and more than $4 billion over budget. Every month, it costs several million dollars just to keep the unused airport running.
Airport staff are paid to flush all the toilets to keep the plumbing working. Ghost trains run to the ghost terminal at night to stop the tunnels from molding. Cleaners clean the unused rooms of the four-star airport hotel.

With so many costly setbacks, T-shirts spotted in the city offer this advice: “Let’s just move the city of Berlin to a functioning airport.” But this time, insists Engelbert Lütke Daldrup, the airport’s chief executive, everything is functioning. Perhaps the biggest incentive to make sure the airport opens, he said, is not to be “laughed at” anymore.
“We German engineers are mortified,” said Mr. Lütke Daldrup, a trained engineer and longtime public official who was called in to save the project in 2017. “Germany is known for its engineering competence. We think of ourselves as punctual, efficient and competent. This was embarrassing for Berlin and for Germany as a whole.”’

‘“This airport is an allegory for Berlin itself,” said John C. Kornblum, a former United States ambassador to Germany, who has lived in the city on and off since the 1960s. “It’s charming, irreverent, eccentric — and utterly dysfunctional.” Chronically indebted and reliant on subsidies from richer states, Berlin is “a sort of failed state” at the heart of Germany, Mr. Kornblum said.’

‘Berlin’s reputation as “poor but sexy,” in the words of one former mayor, is a legacy of the Cold War, when East Berlin was run by Communists and West Berlin was a heavily subsidized capitalist outpost.
Starting with the Berlin airlift during the Soviet blockade in 1948, airports had a special significance in the city for generations: They represented freedom to West Berliners surrounded by the Communist East, and freedom to easterners once the Berlin Wall came down.
A state-of-the-art airport worthy of the reunited capital became a shared dream after reunification — and more recently a matter of real urgency as the city’s existing airports were overwhelmed by rising passenger numbers.
But just picking a location took half a decade — and was arguably the first blunder: Instead of an abandoned airfield in a remote area south of Berlin, politicians opted for a more densely populated spot closer to the city, leading to premium land prices and lawsuits from residents living under the flight path.’

‘Then, a month before the scheduled 2012 opening — tickets had already been sold, and taxis had been practicing drop-off and pickup — it was revealed that hundreds of fire safety doors and a giant smoke extraction system (“the monster”) in the basement did not work.
When management proposed to hire “human fire alarms,” the building inspector told them they were insane.
To avoid another last-minute disaster this year, the airport has run dress rehearsals for months. Thousands of volunteers pose as passengers, testing the airport staff on everything from check-in to crisis response.
On a recent morning, the terminal was buzzing with yellow-vested volunteers dragging suitcases through security. One pretend-passenger had lost her bag, another her child. A third had been instructed she was a pickpocket. “If the police stop you, do cooperate but do not admit the theft,” her script said.
Most extras were Berliners curious to see an airport that in some cases had been talked about for longer than they had been alive. Susanne Wendt, a 33-year-old bank employee, said wryly that she had signed up “to see the airport at least once before it fails to open again.”’

‘Having missed out on the travel boom of the past two decades, Berlin’s new airport now opens in the middle of a pandemic.
“The ultimate irony is that after all this, after 30 years, hardly anyone is flying,” Mr. Kornblum said. At least, he added, “social distancing will be easy.”’

No, this is not schadenfreude. Above all, this article makes me want to declare, me too, I’m a Berliner.

Poor but sexy, who can be against it? You want to be part of it.

The idea to install human fire alarms contradicts all cliches about Germans and Germany.

Also, a human fire alarm might be a tool in the fight against mass unemployment. The late David Graeber might have called it a bullshit job, but who doesn’t want to be a part-time human fire alarm? At least for a few months in your life.