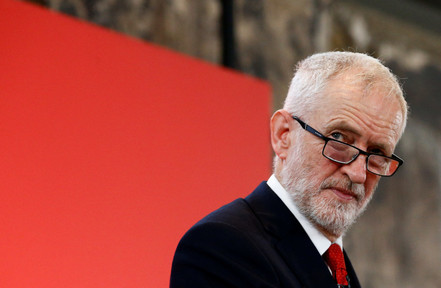 On a fully decent man with a blind spot – Jessica Elgot and Peter Walker in The Guardian:

‘Labour has suspended its former leader Jeremy Corbyn after he said antisemitism in the party was “overstated” following a damning report from the equality watchdog.
The move is likely to ignite a civil war in the party between the leader, Keir Starmer, and Corbyn-supporting MPs.
Corbyn condemned his suspension as a “political intervention” and said he would “strongly contest” the action.
The suspension was provoked by a statement from Corbyn that rejected the overall conclusions of the Equality and Human Rights Commission (EHRC) report, saying the problem was “dramatically overstated for political reasons” by opponents and the media.’

‘A Labour spokesman said: “In light of his comments made today and his failure to retract them subsequently, the Labour party has suspended Jeremy Corbyn pending investigation. He has also had the whip removed from the parliamentary Labour party.” The EHRC report found Labour responsible for unlawful acts of harassment and discrimination over antisemitism. It cites “serious failings in the Labour party leadership in addressing antisemitism and an inadequate process for handling antisemitism complaints”.
However, Corbyn said he had been obstructed by party officials in trying to tackle the issue. “One antisemite is one too many, but the scale of the problem was also dramatically overstated for political reasons by our opponents inside and outside the party, as well as by much of the media.
“That combination hurt Jewish people and must never be repeated. My sincere hope is that relations with Jewish communities can be rebuilt and those fears overcome. While I do not accept all of its findings, I trust its recommendations will be swiftly implemented to help move on from this period.” After his suspension, Corbyn said he would “strongly contest the political intervention to suspend me” – suggesting he believed it was done on Starmer’s direct orders. “I’ve made absolutely clear those who deny there has been an antisemitism problem in the Labour party are wrong. I will continue to support a zero tolerance policy towards all forms of racism.”’ (…)

‘Angela Rayner, Labour’s deputy leader, who was promoted to the shadow cabinet under Corbyn, said the former party leader had “an absolute blind spot” on appreciating the scale of the problem.’

‘“Jeremy is a fully decent man, but as Margaret Hodge said, he has an absolute blind spot, and a denial, when it comes to these issues. And that’s devastating.”’

You can be decent and have a blind spot, the result is devastating.

A slightly more powerful Labor leadership might have prevented Brexit and the rise of Boris Johnson.
The whole anti-Semitism issue is exactly proof how a ‘fully decent man’ can be a catastrophe as a party leader. Of course, the party leader might also have been not so fully decent.