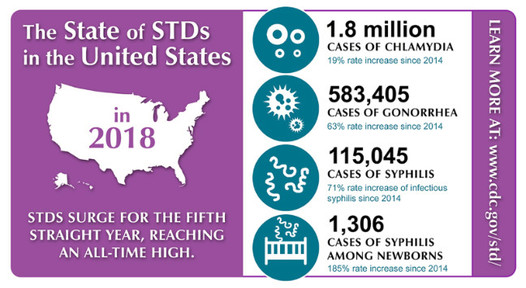 On one of the side effects of the pandemic – Jan Hoffman in NYT:

‘Doctors also believe that many patients who might otherwise seek treatment for S.T.D. symptoms have been avoiding the clinics for fear of being exposed to Covid-19.
And in some regions, essential supplies to test for S.T.D.s are running low because manufacturers of swabs, tubes and reagents are redirecting their products for use in coronavirus tests. As a result, there is a growing shortage of tests for the diseases.
“Our most effective tool for control is timely diagnosis and treatment,” said Dr. Gail Bolan, director of the Division of S.T.D. Prevention at the Centers for Disease Control and Prevention. ‘We’re very concerned that we’ll have continued, unchecked and sustained increases now if people can’t access screening now.” In short, desperate efforts to contain one pandemic could well inflame the spread of another. The C.D.C.’s preliminary 2019 figures, the sixth consecutive record year, indicate 1.76 million cases of chlamydia and 602,000 of gonorrhea. Cases of newborn syphilis alone increased 22 percent from 2018.’

‘Patients with chlamydia or gonorrhea are often asymptomatic; only testing, then, detects infection. But until the pandemic-related restrictions can be relaxed, the letter advised: “Routine screening visits should be deferred.”’

‘As of mid-June, chlamydia numbers remained depressed but reporting of gonorrhea and syphilis had returned to expected rates. Given the limitations on testing and clinic closures, however, cases may well be higher.
“If sexual behavior rebounds while service interruption persists, we project an excess of hundreds of H.I.V. cases and thousands of S.T.I. cases,” researchers from Emory, Harvard and the University of North Carolina, Chapel Hill wrote in a preprint study of the sexual practices Atlanta men who had sex with men during the pandemic.
Social scientists are exploring how the coronavirus outbreaks have affected sexual behavior. Justin Lehmiller, a social psychologist at the Kinsey Institute, which has been issuing surveys during the pandemic to about 2,000 people, gay, straight and bisexual, said that even those in continuing relationships reported having less sex in the first months. “Higher levels of stress and anxiety are pushing down desire,” he said. “Singles have more challenges to hooking up.” But when doctors and nurse practitioners who work with teenagers were asked if the pandemic had slowed down their patients’ sexual activity, they replied that, anecdotally speaking, not at all. Dr. Bolan said that one New York pediatrician reported that she’d treated many teenagers for S.T.D.s.’

‘Even if sex has declined, researchers question how long it can remain suppressed. Dr. Lehmiller noted that online dating apps report record business. Whether that translates into sexual activity rather than virtual meet-ups is unclear, he said. If people are returning to normal levels of encounters, they may not want to admit it.’

How come rates of chlamydia, gonorrhea and syphilis were on track to hit record highs in 2020 the United States?

And then, if sexual activity outside let’s say more or less stable relations is returning to normal levels without people wanting to admit it, what exactly does this say about the effect of government measures against COVID?

By no means, this is an argument to be totalitarian in the fight against any virus, it just to understand human behavior better.

My hypothesis: in the long run desire outweighs fear. People, especially young people of course, will have sex and probably will have unprotected sex, whether the risk is COVID-19 or gonorrhea or both.