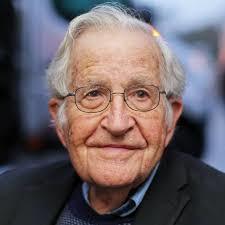 On Chomsky – Jotam Confino in Haaretz:

‘With the election over and Biden now president-elect, Chomsky told Haaretz last week that the work of American progressives is just beginning. In an interview conducted via Zoom, Chomsky, 92 next month, sounds skeptical that the Democrats will bring the change millions of Americans are hoping for.

“What is Biden going to do? The Senate is in the hands of Majority Leader Mitch McConnell, who knows only two things: block anything that Democrats try to do, and the other thing is to give the rich everything they want,” he says.
Chomsky continues: “Biden’s an empty vessel. I don’t think he has any firm principles. He’s up against the DNC [Democratic National Committee], which runs the party and is basically the Wall Street wing. And if he tries anything progressive, the Supreme Court is there to block it. Trump and McConnell are responsible for staffing the entire judiciary, bottom to top, with far-right justices who can block almost anything progressive that comes along,” he charges.’

‘“Despite Biden’s win, Trump won a huge victory,” he says. “It’s amazing that someone who has just killed hundreds of thousands of Americans can even run for office. Just the fact that the election was even contested is a huge Republican victory. Trump is a skilled politician who understands the American mentality,” Chomsky notes.
“Trump has managed to tap into poisonous currents that are right below the surface in American life, culture and history – to simply extract and magnify the poison. And that’s what he has been running on. White supremacy is a deep principle in American society and culture. And Jews are familiar with that. I’m old enough to remember overt antisemitism in the streets. But the anti-Black racism is much more extreme,” he opines.’

‘But Chomsky also believes there’s a fierce backlash among other Americans that must not be ignored. “You have the Republican Party and their voters, [who] are largely white, Christian and traditional from rural America. And what’s their main concern? That their traditional way of life is under attack. And what’s their traditional way of life? Keeping their jackboot on the necks of Blacks,” he states.
“If you look at the birth rate in the U.S. right now, the majority are non-white,” he adds. “You don’t have to know the statistics to know what that means. They will lose the white supremacy. The concept of being white is not a race concept, but rather sociological. If you go back, not very far, Jews were not considered white. Neither were the Irish. In late-19th century Boston, you could find signs at restaurants saying “No dogs or Irish.” They gradually became white as they assimilated into the culture, especially when they gained wealth and political power. And that’s now happening with the Hispanic population,” Chomsky believes.’

‘“Let’s assume Biden goes back to Obama’s policies. Contrary to what many Israelis think, Obama was the most pro-Israel president prior to Trump. He never imposed any demands on Israel. Israel’s settlement freeze in 2010 under Obama was a complete farce. And everyone knows it. The Israeli press reported correctly that it had no effect. Instead of building new settlements, they called it expansion,” Chomsky argues.
The Palestinians, on the other hand, are looking forward to ending four years of hostility between Ramallah and Washington.
“There is hope for the Palestinians, but it doesn’t lie with Biden,” Chomsky says. “It lies with the public opinion in the U.S., which can’t be suppressed forever. If you go back 20 years, the support for Israel would be among liberal democrats. Now it’s shifting to evangelicals and ultranationalists. And support for Palestinians is growing among liberals – especially the young ones. Sooner or later that might influence policy.”’

Chomsky is feigning naivete, of course you can run for office while having killed thousands of people. And precision of language is important. Trump didn’t order the military to shoot at American citizens – he came close but it didn’t happen.
George W. started two wars that turned out to be disasters, but he reelection handily.

And if public opinion in the US can influence policy, and yes of course, it can, then the opinion of the Republican base might also change.

Also, Chosmky seemed to have missed that the Trump voter is by far not only the white, rural man.

‘Philadelphia offers a snapshot: A record number of Latinos in the city, which is heavily Puerto Rican and Dominican, turned out and buoyed Mr. Biden. Yet exit polls also found that Latino voter support there for Mr. Trump leapt to 35 percent this year from 22 percent in 2016. In Milwaukee, an analysis by Urban Milwaukee reported an uptick in the Latino working-class vote for Mr. Trump, although a majority still favored Mr. Biden.’

‘Muslim voters also confounded Democratic strategists with their support for Mr. Trump reaching 35 percent, according to The Associated Press. This, too, is a constituency difficult to pigeonhole, as it encompasses Africans, Arabs, South Asians and Europeans.
“A sizable number of Muslims have experienced Donald Trump and to the surprise of Democrats they said, ‘We want more of that,’” Shadi Hamid of the Brookings Institution said.’

Muslim ban? No Muslim ban. It seems not to matter that much.

Fair enough, Chomsky acknowledges that who is and who isn’t white is not so much a matter of color. Not too long ago, the Irish in the US were not white. The Jews were not white. I would argue that European Jews are still not white.
Another reason to be skeptical about these subdivisions, here there is mankind, underneath mankind we find several different sorts of humans, but never individuals.
All these subdivisions are marketing and read Powell’s article, marketing can fail.