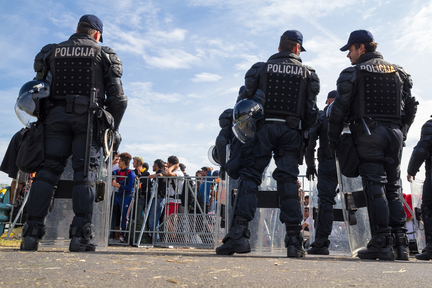 On European values, sort of – Steffen Lüdke and Nicole Vögele in Der Spiegel:

‘The European Union closed the Balkan route to migrants in 2016, after it had already been used in previous months by hundreds of thousands of refugees from Syria and other countries as they made their way to Western Europe. Thousands of refugees have been camping in the forest and in old war ruins in northwest Bosnia-Herzegovina ever since. On the other side of the border, Croatian officials with night-vision goggles and firearms patrol the border. But that doesn’t stop the refugees from setting off each night. They have a name for their dangerous attempt to get past the border guards: "The Game.” Asylum seekers have been reporting for years of abuse at the hands of Croatian police and of being forced back to Bosnia. Photos from aid organizations show refugees with bleeding lacerations, broken arms, knocked-out teeth and dark red marks on their backs. Asylum-seekers speak of torture with stun guns, sexual abuse and even torn-out toenails. The focus of their reports is always the same: Masked police officers.
NGOs, doctors and even the United Nations Refugee Agency have collected thousands of such testimonies. Sometimes, skin color alone is enough to become a target of the security forces. In winter 2019, Croatian border guards illegally deported two Nigerian table-tennis players who were only trying to take part in a university championship.
Pushbacks, as they are called, violate not only Croatian asylum law but also European law and the Geneva Convention on Refugees. They make a mockery of the right to apply for asylum. Instead of being given a hearing, asylum-seekers are beaten.
The Croatian authorities deny that officers use force at the border or that they illegally drag asylum seekers back across the border. The government has simply ignored video clips showing security forces leading asylum-seekers to the border. Government officials also claim that refugees have simply invented claims of violence. Croatian Foreign Minister Gordan Grlić Radman recently said that his country denies "all accusations of incorrect behavior at the border.”’

‘The reporting clearly shows that it is not only in Greece that refugees are being pushed back forcibly. On the Bosnian-Croatian border, masked men are beating up refugees. The images reveal a disturbing level of violence that is increasingly becoming the norm at the EU’s external borders.
Ibrahim, for his part, had already failed to get past the Croatian security forces dozens of times, but in March things went better than usual. He and three other migrants described to DER SPIEGEL how they, together with around 50 other refugees, some of them underage, set off that day for the EU. The men crossed the border near Šturlić, a village in Bosnia, before walking through the wilderness of the Croatian forests. It was cold, and at night they slept in cheap sleeping bags.’

‘When contacted by DER SPIEGEL, officials at the Croatian Interior Ministry said in a statement that they have no records of any operations on the date and location in question. They said they could not comment on the events described without further details. Croatia offers asylum seekers the opportunity to apply for asylum, the statement says, and goes on to claim that NGO reports on injured migrants almost completely ignore the conflicts between migrants in Bosnia-Herzegovina. The ministry claims that the migrants are injured in accidents or that they inflict injuries on each other and then blame Croatian border police.’

‘The Glina River along the border is a popular place for pushbacks. It is easily accessible from the Croatian side and only sparsely populated on the Bosnian side. Gujić says the Croatians recently paved the gravel road leading to the border, an omen, he believes, that the half-naked, injured men will keep coming. Gujić can't understand the violence: "You don't even hurt animals like that."
The EU pays Croatia millions of euros to secure the border. Croatia is also slated to join the Schengen Area soon, meaning its borders with other members of the area will no longer by controlled. Once that happens, the Croatian border with Bosnia-Herzegovina will become one of those places where decisions are made on how many asylum-seekers are actually allowed to reach Western Europe.
In October 2019, the European Commission gave Croatia a positive evaluation in its progress toward accession into the Schengen Area, but said it would have to continue its work on "management of the external borders.” All Schengen member states must approve any country’s accession. But already, the Croatian government is effectively acting as one of Europe's gatekeepers.’

‘"The EU is turning a blind eye to pushbacks,” says former Croatian Interior Minister Ostojić. He says it appears EU officials don’t seem to care whether the border police act in accordance with international law. And their silence merely encourages the Croatian government.
"The images are the clearest evidence yet that Croatia engages in violent pushbacks,” says Hanaa Hakiki, a lawyer with the European Center for Constitutional and Human Rights (ECCHR), a Berlin-based human rights organization that provides support to refugees facing court proceedings. She notes that the deportations did not take place at official border crossings and that some of the weapons used by the masked men were homemade. "In light of these terrible images, the EU should take immediate action,” she says.
Ylva Johansson, the European Commissioner for Home Affairs responsible for EU borders, sent a letter to the Croatian Ministry of the Interior at the end of October and urged that the reports be investigated. "If proven true, what is shown there is of course unacceptable," she now says after viewing the images. "People cannot be beaten up at the border. There must be consequences."’

Abuse, torture and utter lawlessness, all in the name of secure borders, all to get the numbers of migrants down, all to appease the extreme-right in several EU-countries.

These horrendous crimes are committed in the name of the EU. To abolish or weaken the EU is not the solution.
But before the EU can criticize Belarus, and yes, the member states try to be as silent as possible about Belarus, they must find a solution for the criminal abuse that’s going on at its borders under the disguise of border control.