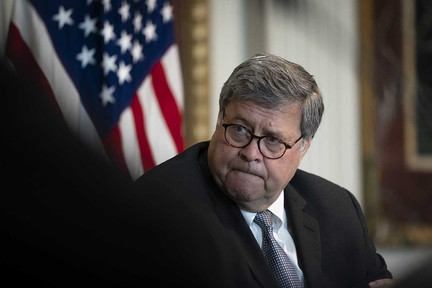 On Schmitt and Barr - Tamsin Shaw in NYRB:

‘US Attorney General William Barr’s defense of unchecked executive authority in his recent speech to the Federalist Society had an unpleasant familiarity for me. It took me back to a time in my life—during the late 1990s, as a graduate student in England, and the early 2000s, teaching political theory in the politics department at Princeton University—when I seemed to spend altogether too much time arguing over the ideas of a Nazi legal theorist notorious as the “crown jurist” of the Third Reich.
Carl Schmitt’s work had then become popular in universities, and particularly in law schools, on both sides of the Atlantic. The frequent references to his “brilliance” made it evident that in the eyes of his admirers he was a bracing change from the dull liberal consensus that had taken hold in the wake of the cold war. Schmitt’s ideas thrived in an air of electrifyingly willed dangerousness. Their revival wasn’t intended to turn people into Nazis but to rattle the shutters of the liberal establishment.
Schmitt was supposed to be a realist. For him, laws and constitutions didn’t arise from moral principles. At their basis, there was always a sovereign authority, a decision-maker. Schmitt stipulated that the essential decision was not a moral choice between good and evil but the primally political distinction between friend and enemy. And that distinction, in order to be political in the most important sense, had to generate such intense commitment that people would be prepared to die for it. He set out this view in a brief work, The Concept of the Political, in 1932. Only a few years later, he and many of his fellow Germans showed that they were prepared to kill for it. And kill and kill and kill.’

‘The concept of the “enemy combatant” became sufficiently vague for the executive branch to apply it more or less at will to whatever person it pleased. And for many of those advocating pre-emptive war, or rendition and torture, on the grounds that terrorists might attack us with weapons of mass destruction, the sense of “it’s them or us” developed a new and ugly intensity.
The problem of containing the terrorist threat was not construed as one of detection and policing. It was a war. And for prominent thinkers and politicians on the right, it was a civilizational battle for “Judeo-Christian values” against “Islamo-fascism,” a friend-enemy distinction that remains deeply rooted in parts of American society today. This ill-defined enemy is the specter constantly evoked by the people Trump has chosen as his advisers and officials. Their mythic world-historical struggle has become detached from the actuality of counter-terrorism operations. General Michael Flynn, a veteran of the “global war on terror,” wrote in his 2016 book The Field of Fight: We’re in a world war against a messianic mass movement of evil people, most of them inspired by a totalitarian ideology: Radical Islam. But we are not permitted to speak or write those two words, which is potentially fatal to our culture.
The idea that “evil people” might destroy “our culture” is alarmingly bellicose rhetoric, but one that is evidently persuasive for certain people. Steve Bannon uses it, too. He made a speech via Skype at a Vatican conference in 2014 in which he stated that “we are in an outright war against jihadist Islamic fascism.” These are just the beginning stages “of a very brutal and bloody conflict.” He called upon the “church militant” to fight this “new barbarity.” In the White House, Bannon’s main initiative was the racist and deeply harmful travel ban on people from Muslim countries.’

‘The reality of the “war on terror,” though, is becoming further and further detached from the mythic crusade against “Islamo-fascism.” The greatest terrorist threat America now faces comes from domestic terrorists. And national security policy has pivoted away from the Islamic world toward more traditional geopolitical rivals such as Russia and China. We’re not engaged in a binary civilizational battle. As the myth becomes unsustainable, Barr and his allies will have to find a new enemy to justify their view of the president as the indispensable, unitary sovereign at the head of an executive branch that is perpetually on a war footing. They will be forced to ramp up the rhetoric of apocalyptic conflict—as Barr is indeed doing.
This doesn’t mean, of course, that they will need a foreign war (though, as the escalating confrontation with Iran shows, this may remain an option); all authoritarian regimes create their own internal enemies. No one should doubt Barr’s capacity and will to do this. In his original tenure as attorney general, from 1991 to 1993, Barr disbanded the counterintelligence team of the FBI that had been focused on the Soviet Union during the cold war but whose expertise and Russian language skills seemed less relevant in 1992. He instead turned the FBI’s attention to gang-related crime and violence and became a leading advocate of the mass incarceration policies that have since so disproportionately affected America’s black population.
And today, during his second tenure leading the Justice Department, in December 2019, he returned to these themes—apparently disputing the right of Americans of color to protest police violence. Law enforcement must be respected, he said, adding ominously that “if communities don’t give that support and respect, they might find themselves without the police protection they need.” In effect, he reserved the right to make decisions about who should and should not be afforded the protection of the rule of law, a notably Schmittian reflex.’

‘Independently of Trump and this presidency, William Barr, his henchmen, and his Federalist Society supporters represent a powerful threat to the fundamental values of liberal democracy.’

As Tamsin Shaw does I would like to list Mr. Barr as an enemy, kind of, but do we need to invoke Carl Schmitt for this?

Tamsin Shaw's dismissal of Carl Schmitt is flimsy, he poohpoohs students who felt attracted to Carl Schmitt without taking his enemy seriously.
And once again, so many thinkers have started a serious dialogue with Schmitt, you cannot tie Barr to Schmitt and Nazism without acknowledging this. (Again: Benjamin, Derrida, Taubes, Agamben, Mouffe.)

And even somebody like Hannah Arendt made clear that morality is slightly more complicated than Shaw makes it sound: here is the moral liberal democracy, and there are the illiberal enemies, but of course when we label someone enemy it cannot be compared to our enemies and their ideas about enemy.

Yes, I would say that it’s a sign of racism to deny people from seven mainly Muslim countries entry to the United States. But all countries deny entry to some or most citizens of other countries, can we deny entry to people who have not been vaccinated against Covid? Is this justified? When Roosevelt denied entry of Jewish refugees from Europe was he under the influence of Carl Schmitt? Or was he just thinking, we have enough Jews in this country?

The war on terror was a disaster, but you cannot blame Carl Schmitt for this war.

Some people are so much in need of an enemy, but they don’t want to think about their needs.