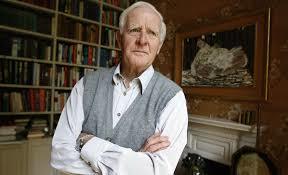 On John le Carré – an appraisal, Anshel Pfeffer in Haaretz:

‘In fact, he blamed the left as much as the right for the wave of populist anger among Britain’s traditionally Labour-voting working-class, which fueled both the Brexiteers’ victory in the 2016 referendum and the Conservatives’ landslide in the 2019 election. “Don’t blame the Tories for their great victory,” Le Carré said in a speech in January. “It was Jeremy Corbyn’s Labour party, with its unpolicy on Brexit, its antisemitism and student-level Marxism-Leninism, that alienated traditional Labour voters and left them nowhere to go.”’

‘As a teenager in the 1980s, first discovering his books, nothing could compete with the first thrill of reading his Cold War novels, and learning the perils of moral certainty through spy-chief George Smiley’s stoic negotiation of the ambiguous landscape of post-war Europe, and his encounters with souls torn by the shards of the 20th century’s great ideologies.
When the Cold War ended, Le Carré continued to write spellbinding novels, but they were often interspersed with long, somewhat doctrinaire if eloquent soliloquies that he placed in the mouths of his heroes on the ills of capitalism and neo-conservative politics, lumping together the governments and policies of the United States, Britain and Israel.
Not that they were necessarily wrong – as the years passed, many of them proved increasingly accurate and prescient. But I never wanted Le Carré to tell me right from wrong. He had already convinced me that you can never really tell.’

‘Le Carré had at times been accused, unfairly, of antisemitism. There were those who back in the 1960s objected to the fact that two of the main characters in his first bestseller, “The Spy Who Came in from the Cold,” were both Jewish and Communist, as if he was somehow casting aspersions on Jews in general for being politically unreliable. Then, when he waded in to the Israel-Palestine conflict in “The Little Drummer Girl,” he faced attacks for giving the Palestinian side both humanity and an equal moral claim to that of the Israelis.
But, as he explained in an interview in 1998, he found himself “wholeheartedly behind the nation-state of Israel as the homeland and guardian of Jews everywhere. And wholeheartedly behind the peace process as the guarantor not only of Israel’s survival, but of the Palestinian survival also.” Then there was the bizarre accusation in a New York Times review that by casting Harry Pandel as a Jew - Pandel, the tragic hero of “The Tailor of Panama,” fabricates both elegant suits and a whole panoply of false intelligence leading to brutal suppression and a war - he had somehow created “yet another literary avatar of Judas.”’

‘At 16, Le Carré had escaped from an abusive childhood to Switzerland, where he pursued his love of the German language and of the concept of Europe. It was 1948: the war had been over for just three years, and all around him were refugees. One Jewish refugee who taught him German in Berne urged him to go and visit Germany, where among other places, he visited the sites of the concentration camps which had yet to become sanitized, museum versions, and still held the recent memory of those who had been destroyed there.
A few years later, he became an intelligence officer, first based in London, on the look out for Communist spies, and then based in West Germany, where the UK’s new allies were mostly former Nazis, and the new enemies in East Germany were often those who had suffered at their hands.
Le Carré is known as the ultimate master storyteller of the Cold War, but he is as much the chronicler of the ruins left by the war, its human living remains. Which is why his early books were so filled with Jews, who bore their physical and mental scars and kept on fighting Europe’s wars.
“Take your hands off me!” Elsa Fennan screams at Smiley, when he finally confronts her with proof of her spying on Britain and on her husband. “Do you think I’m yours because I don’t belong to them? ... don’t think I’m on your side, d’you hear? Because I’m the wandering Jewess, the no-man’s land, the battlefield for your toy soldiers. You can kick me and trample on me, see, but never, never touch me, never tell me you’re sorry, d’you hear?” You can’t write like that nowadays and not be eviscerated by one of the mobs, the politically correct mob or the “Israel lobby” mob. But Le Carré had seen what Europe had done to its Jews, the Jews who were the ultimate Europeans. He didn’t have to exalt them.’

‘In hindsight, it was totally in character for Le Carré to equally detest Corbyn’s Labour and the Tory Brexiteers. It was anger for having allowed antisemitism to seep back in to Britain’s bloodstream, and for ripping the UK away from the European Union which, for all its flaws, had been the best guarantee against the continent tearing itself apart once again.’

There are nothing many things worse than frivolous accusations of anti-Semitism.

Sometimes the demise of an author seduces you to take a second look at his work. Thus happened to me with John le Carré, for a long time I thought about him as an author I had read in my teens, in the same line as Georges Simenon, Agatha Christie, Per Wahlhöö, good authors (Simenon is probably one of the best among these authors) but merely producers of entertainments.

Rereading a bit of John le Carré I realized how good his work is.

And yes, his political intuitions were astute, the unpolicy of Labour on Brexit will remain a stain for quite a while.