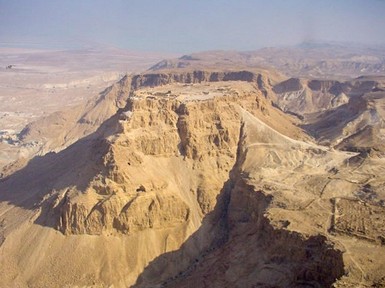 ‘The historian Steve Mason has called The Jewish War by Flavius Josephus “perhaps the most influential non-biblical text of Western history.” This may seem a surprising choice. Written in Greek around 75 AD, the war it describes—the Judaean revolt against Roman rule that began in 66 and largely ended in 70 after huge losses, including the destruction of much of Jerusalem and the tearing down of its Temple—hardly seems today to be “the greatest not only of wars of our own times, but of all those we have ever heard of,” as Josephus claims in his opening words. Yet the work continues to fascinate, especially now that thorny questions have emerged concerning its account of the war’s coda in the year 74: the mass murder-suicide of nearly a thousand Jews who resided on the fortified hill of Masada, just before it was captured by the Romans.

Masada, which overlooks the Dead Sea, has, over the past century, become a symbol of Jewish self-assertion and resistance to domination. Its well-preserved ruins became a pilgrimage site for Zionist youth in the 1920s and 1930s, and Yitzhak Lamdan’s poem “Masada” (1927) made a rallying cry of the words “Never again shall Masada fall!” The story of Masada’s last days, as told by Josephus, took on new meanings during the Holocaust and subsequent struggles for Israeli statehood. In the mid-1960s the archaeologist Yigael Yadin, the first large-scale excavator of Masada (and former chief of staff of the Israel Defense Forces), publicized what he considered to be vivid evidence proving Josephus’s account, though his claims have since been challenged. The controversy over what happened at Masada, and what various scenarios might mean for modern Jews, has only grown since.’

‘What happened next is described in The Jewish War in surprisingly dispassionate tones. With forty followers, Yosef took refuge in a cistern from which no escape was possible. In an episode that eerily prefigures his account of Masada, he and his men decided to kill themselves rather than submit, and they drew lots to determine the order in which one would slay the next; the last would commit suicide. Yosef, “whether by chance or the foresight of God,” drew one of the last two lots. After watching thirty-nine men die by the sword, he abandoned his resolve and convinced his remaining comrade that they both should surrender and live. Brought before Vespasian, Yosef, in a second prophetic moment, addressed the commanding general as the future emperor of Rome. Vespasian was intrigued and kept the young Jew in his retinue rather than shipping him off to Nero as planned. Within two years, after Nero’s ouster and a bloody fight among the generals seeking the throne, Vespasian was installed as emperor. By that time Yosef was an adjutant to his son Titus, whom Vespasian had left in command of his troops, and was well on his way to becoming the Judeo-Roman grandee Titus Flavius Josephus.’

‘After impressing the Romans with his seeming prophetic powers at Iotapata, Josephus went on to become a member of Titus’s staff during the subsequent siege of Jerusalem. As a go-between who could speak Hebrew, he sought, in a speech he records (or invents) in The Jewish War, to persuade the city’s defenders to end their rebellion. His mission failed. The siege came to a brutal conclusion with the sack of the city and the destruction—accidental, according to Josephus—of its Temple, tragedies remembered by Jews today with the fast of Tisha B’Av. Josephus accompanied the victorious Titus back to Rome, where he ultimately received land and income from his imperial sponsors. Vespasian meanwhile used his son’s success in the Jewish War to prop up his own authority, staging an enormous triumphal procession in 71, the first such spectacle Rome had seen in decades. Later, the Flavian amphitheater, now known as the Colosseum, bore an inscription declaring that it was paid for out of war spoils, and the Arch of Titus in the Forum presented bas-relief scenes—still visible today—of the sack of Jerusalem.
Josephus’s Jewish War, itself a monument to Flavian power, was composed in the same years (the 70s) that the Colosseum was built.’

‘Just as Thucydides did, Josephus rises to emotional crescendos as he depicts extremities of pain, in particular the pain of the Jews during the siege and fall of Jerusalem. (The story of Mary of Bethezuba, a starving mother who cannibalizes her own infant, is recounted at some length.) Rome is neither blamed for that cataclysm nor exonerated. The Jews, tragic victims of a war they foolishly brought on themselves, are ennobled by their suffering, but Josephus, in Mason’s view, does not begrudge the Flavians the political capital they gained from Judaea’s destruction. A former leader himself, Josephus ultimately shows us that he “understands political necessity.”’

‘I am often asked if I believe there was a mass suicide at Masada, to which I respond that this is not a question archaeology is equipped to answer,” she writes. Those seeking to unravel Masada’s mysteries will be disappointed, but others will be reassured by Magness’s even tone and nondoctrinal approach. Addressing the twelve inscribed ostraca, for example, she notes an alternative interpretation, according to which the potsherds are not lottery tokens but name tags used in food distribution. She concludes the discussion by declaring them an “open question.” Magness cites Mason’s book in her endnotes as a “radically revisionist reading of Josephus’s account,” but does not engage with it in her text. That’s unfortunate, since some of his arguments demand a response. He claims, for example, that the Roman siege ramp was never completed (it does not nearly reach Masada’s summit today, which has generally been explained as the result of erosion), and therefore the attackers could not have taken the site in the way Josephus reports. Mason thinks it entirely possible, and in keeping with historical patterns he finds elsewhere, that the Roman commander at Masada offered terms of surrender to the Jews but then treacherously slaughtered them after they opened their gates. The seven women and children who escaped could not gainsay the account of the lofty Josephus—an account that can thus be seen as one of history’s most successful cover-ups. The truth, Mason concedes, is probably unrecoverable.
Magness worked as a tour guide at Masada in the late 1970s, some ten years after Yadin’s excavations. She notes that by that time, the site had already begun to lose symbolic importance in the minds of Israelis, even while attracting growing numbers of non-Israeli visitors. Masada “still resonates with Diaspora Jews who make the pilgrimage to the top of the mountain, where their guides relate the story of a small band of freedom fighters who made a heroic last stand against Rome,” she writes. This offhand comment, on the last page of her last chapter, may go farther than Magness realizes toward explaining the account by Josephus of Masada’s fall. Did he invent the Masada myth in answer to his own psychological needs, as a former priestly Jerusalemite who had stood by during the destruction of his city and then had become a worldly Roman, far removed from his nation’s travails?’

‘Submission to Rome was, in his eyes, a more prudent path than defiance, but carried its own costs. Did Josephus, in the Masada episode, craft an image of the total commitment he himself had been unwilling to make?’

To quote Ecclesiastes 9:4 (King James) : ‘For to him that is joined to all the living there is hope: for a living dog is better than a dead lion.’

All nationalisms, and for that matter, probably all organized religions need the (myth of) total commitment most of the believers are not willing to make. (See under: lion and dog.)

The question is (as the damned Mr. Carl Schmitt intuitively understood): what are you willing to die for?

Most people opt for the prudent path, but seldom become these people well-read historians and assistants to emperors. Sometimes the prudent path turned out to be nothing but a life filled with collaboration and war crimes.

Your choice matters, even if you are reluctant to become a dead lion.

On the other hand, Antigone teaches us that both the prudent and the less prudent path are just different paths to almost the same catastrophe.
Which is not to say that choice doesn’t matter, merely that choice is inevitably tragic.