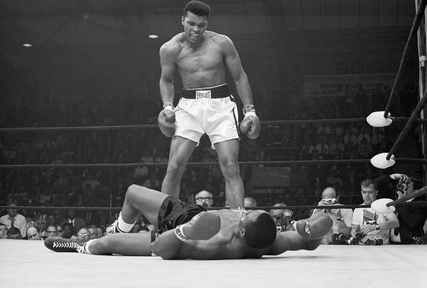 ‘It was Sugar Ray Robinson, the greatest boxer of all time for many, who hired the Arabian Knight, and it was Sugar Ray who arranged for Muhammad Ali to meet the deity-attuned Harlem street poet and nightclub habitué Drew Bundini Brown. Sugar Ray had noticed that Ali, then Cassius Clay, was reciting his poetry in a Greenwich Village café days before his fight with Doug Jones as he was ascending the heavyweight ranks on his way to a title bout with Sonny Liston. He thought he needed someone to mind him. “I have just the man for you”, Sugar Ray said. “The Black Prince.” Drew Brown II was born in 1928 in West Palm Beach, Florida (or Midway, depending on which of these two books is to be believed in this matter). His father was an alligator hunter who beat his gentle schoolteacher wife until she fled with Drew’s younger brother, leaving the first-born behind with his father. He used to wait for her at the mail box, but she never came back. The burden was too great for the father, and he sent the boy alone on a bus to relatives with a note pinned to his jacket saying, “Do the best you can for him”. Drew lied about his age and joined the navy at thirteen, sailing the world’s oceans and being given the name Bundini by harbourside girls at a small port in India. “I was on top of the world”, he said when he forsook the sea and settled in Harlem. “New York was a play toy for me. When a man is a traveler the world is his house and the sky is his roof, and where he hangs his hat is home and all people are his family.” This was his credo, from which he never deviated.
He met a young Jewish woman named Rhoda Palestine from Brighton Beach at a Miles Davis night at the French Quarter on West 46th. In time they married and took an apartment above Sugar Ray’s nightclub in Harlem. This man of many names was a confection of many ingredients – street wisdom, jive talk, the deft string of invective known in the Black world as “the dozens”, and a profound empathetic tenderness. He called God Shorty and saw Him in every kind and noble act. He saw Him in Sugar Ray when he paid the restaurant bill for a solitary woman with crutches propped against her chair. But it was his talent for insult that caught the attention of other boxers. They found it gave them an edge. He didn’t let up when he met Honey Boy Bratton and was hired for his next fight. When he walked into Ali’s hotel room and charged that his fights must have been fixed if he could predict the rounds of his victories, Ali was fascinated. “You either a phoney or Shorty’s in your corner”, he went on. “Tell the truth.” They sat together on the floor. “The truth is”, whispered Ali, “every time I go into the ring I’m scared to death.” This and a thousand other things brought Bundini to tears.’

I must say, this brought me almost to tears as well.

Let’s follow the example of Drew Born II and let’s call God from now on Shorty.

Much more is not needed to change the world.