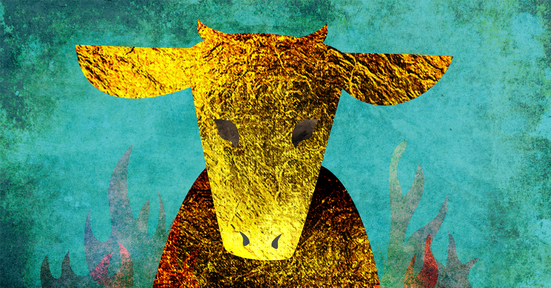 On idols – Ariel David in Haaretz:

‘Throughout history, Jews are said to have chosen violence and death over bowing down to a pagan idol.
The festival of Hanukkah marked in December celebrates the anti-Hellenistic revolt of the Maccabees that was supposedly sparked when one priest, Mattathias, refused to sacrifice to an idol. Similarly, many Jews were prepared to die in the mass protests successfully staged, around 40 C.E., against the decision by the Roman emperor Caligula to erect a statue of himself in the Templein Jerusalem. And many did die when the Bar-Kochba revolt exploded in 132 C.E. after the emperor Hadrian built a shrine to Jupiter on the ruins of that same Temple.
Perhaps some of these martyrs of the faith would have been surprised to learn that, centuries before, their forefathers would have seen nothing improper in worshipping religious images and may have even bowed down to a statue of Yahweh himself in the First Temple.
Most researchers today agree that the biblical ban on making graven images did not yet exist as we know it in the First Temple period.’

‘Archaeologists and biblical scholars have long known that during the Iron Age – that is, when the First Temple was in existence – the Israelites were not particularly monotheistic and worshipped other deities alongside Yahweh, including a goddess called Asherah, believed to be God’s wife.
They also did not shy away from making images, as shown for example by the thousands of figurines found within the borders of the kingdoms of Israel and Judah. These statuettes depicted animals, horses and riders as well as naked women. While their meaning and function are still a source of much debate among experts, these figurines would seem to be in clear contradiction with the Bible’s repeated admonitions against making graven images, the most famed of which is the second of the Ten Commandments: “Thou shalt have no other gods before me. Thou shalt not make unto thee any graven image, or any likeness of any thing that is in heaven above, or that is in the earth beneath, or that is in the water under the earth. Thou shalt not bow down thyself to them, nor serve them.” (Exodus 20:3-4)’

‘In other words, some of the ideas and norms that are closely associated with Judaism today would have looked completely alien to the ancient Israelites since they only developed and were added to the texts ultimately finalized as the Hebrew Bible as we know it at a later time.
This however does not mean that the taboo of making images just sprang out of nowhere after the destruction of the First Temple. It likely evolved from cultic practices of that period, particularly those related to the way the ancient Israelites worshipped and depicted their main deity – Yahweh.
In the Bible, God is depicted as having anthropomorphic features: he makes humankind “in his own image” (Gen. 1:27); he brings Israel out of Egypt “with a strong hand and a stretched out arm” (Psalms 136:12); he “sitteth upon the throne of his holiness” (Psalms 47:8); he has a face (Gen. 19:13), nostrils and a mouth (2 Samuel 22:9). The contradictory concept that God has “no form” (for example in Deut. 4:12) and is an invisible, ubiquitous presence is most probably a later addition to the biblical text, meant to enforce a theological and conceptual about-face, experts posit.’

‘These representations borrowed heavily from the religious iconography of the predominant neighboring cultures, especially the Egyptians and Mesopotamians, and are found on seal impressions and other material remains unearthed by archaeologists in the lands of the Iron Age kingdoms of Israel and Judah. Throughout the First Temple period, Yahweh is represented by divine symbols common in the ancient Near East: a scarab, a winged disk or a sun. In one 8th century B.C.E. seal impression found in Jerusalem, he appears as a winged disk, an Assyrian symbol of divinity, mounted on an empty throne, an Egyptian motif which was also adopted by the Phoenicians, in today’s Lebanon.
Yahweh is also thought to appear on a 10th century B.C.E. cultic stand found at Ta’anach, today in the northern West Bank, notes Thomas Römer, an expert in the Hebrew Bible and professor at the College de France and the University of Lausanne. Here, he appears as a solar disk above a stylized tree and a naked goddess, both of which could be representations of Asherah, Römer says.’

‘It’s important to note that the reluctance to depict Yahweh as a human figure was not a red herring in the theological atmosphere in which the ancient Israelites lived. During the Iron Age, especially in Mesopotamia, anthropomorphic representations of gods become rare and were usually confined to the holy of holies of temples, while outside the sacred precincts the same deities were represented through symbols: stars, animals and so on, Ornan explains.
This progressive abstraction of divine representation began already in the Bronze Age, she says. In fact, the higher the position of a god within a local pantheon, the less likely it was for it to be depicted in human form.
“Anu and Enlil, the heads of the Mesopotamian pantheon, are almost never represented as anthropomorphic figures,” Ornan notes. “This doesn’t mean there was no human-shaped statue in the holy of holies of their temples. But these cultic statues didn’t survive, probably because they were made of wood and plated with various metals.”’

‘The spread of this partial aniconism in the Near East may have served to enhance and preserve the mystique of the most powerful deities – as what you can’t see is often more awesome and mysterious than what you do, Ornan notes.
Or, more practically, such traditions may have been encouraged to increase the power and income of local elites, whether in Babylon or in Jerusalem. “It may have been a political or economic strategy to maintain the exclusivity of temples – only there you get to see the ‘real thing’ while outside you see the god in another form,” Ornan says.’

‘That commandment was probably intended as a very literal injunction to place no images of other deities “in front of Yahweh,” that is, in his Temple in Jerusalem, Römer says.
In other words, the law was meant to reserve that specific shrine for one specific god. It said nothing about making images of other deities, or of Yahweh himself, and worshipping them elsewhere – which explains the plethora of gods and effigies in ancient Israelite culture.
The rest of what we know today as the second commandment was added in various stages, probably in the Persian period, first to prohibit the representation of Yahweh and finally all images, Römer says.’

‘But with the Israelites, something rather unique happened. Out of the jaws of defeat they snatched a conceptual triumph: monotheism. There were in fact no other gods, the exiled Hebrews reasoned, and Yahweh was not just a national god of Israel, he was the sole, supreme ruler of creation, who had simply used the Babylonians for his own purposes, to punish his chosen people for their sins. And what sin were they being punished for? None other than making idols of Yahweh himself and of the other deities they once mistakenly worshipped. After all, the destruction of the Temple and the loss of its sacred artifacts (including the hypothesized statue of Yahweh) lent itself well to this explanation and to the idea of an invisible, omnipresent universal god who could be worshipped anywhere.
From then on, the biblical redactors would pour opprobrium on any representations of the divine. This is the origin, for example, of the prophecy in Deuteronomy warning that, should the people of Israel “act corruptly and make a carved image in the form of anything” they shall “utterly perish from the land.” (Deut. 4: 25-26)
However, the concept of a formless god and the complete rejection of images – both divine and terrestrial – were not accepted overnight by nascent Judaism in the Second Temple period, Römer notes. Witness, for example, that after the return from the Babylonian exile, the now Persian-dominated province of Judah minted a coin showing a deity seated on a winged wheel – believed by many scholars to be the only known anthropomorphic representation of Yahweh.’

‘This final leap into an abstract faith occurred only in the 10th century with the writings of the Jewish scholar Saadia Gaon, who was strongly influenced by Islamic thought, and with the works of the 12th century philosopher Maimonides, she says.
Only then, probably more than 2,000 years after the First Temple was built, was this tortuous theological and conceptual evolution, shaped by the triumphs and tragedies of Jewish history, finally completed; and Judaism became the religion we know today.’

Monotheism as a side effect of defeat. You explain your military defeat and hence your exile by stating that you worshipped idols, but as this article points out it took another 2000 years for the abstract, figureless God that Judaism and Protestantism and Islam worship came into being. Catholicism is much more pagan, one of the big attractions of Catholicism.
The evolution of God, from a (‘Archaeologists and biblical scholars have long known that during the Iron Age – that is, when the First Temple was in existence – the Israelites were not particularly monotheistic and worshipped other deities alongside Yahweh, including a goddess called Asherah, believed to be God’s wife.’) deity with a wife to something that should be described as the law.

If we accept that the coming of the Messiah is not so much the coming of a person, but the ideal, perfect interpretation of the law we should conclude that we don't need images indeed, just words.

In other words, the Messiah himself is flawless interpretation. A thing that turns out to be again and again out of reach for us.