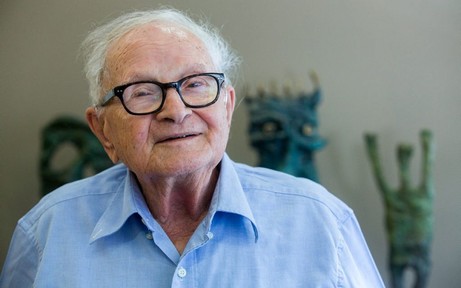 On spies and censorship – Yossi Melman in Haaretz:

‘There were two seminal events in the riveting, adventure-filled life of Rafi Eitan: his role as commander of the Mossad team of four kidnappers who, in May 1960, caught Nazi war criminal Adolf Eichmann in a Buenos Aires suburb; and his involvement in the Jonathan Pollard espionage affair a quarter of a century later. The first event was a source of pride to him; the second, one of extreme torment.
In his memoir, “The Secret Man” (“Ish Hasod,” in Hebrew), on which he labored for years and which was finally published posthumously, in 2020, Eitan devotes three chapters and dozens of pages to his involvement in the Eichmann kidnapping. There’s nothing new in them. Everything has already been written and spoken about Operation Finale. In contrast, the chapter about Jonathan Pollard, the Jewish-American intelligence officer who spied for Israel, and served 30 years of a life sentence before – and only after the lifting of the restrictions imposed on him by the U.S. government – his recent immigration to Israel, is a mere five-and-a-half pages long. It’s the shortest chapter in the book, and yet one of the most interesting.
In his brief account, Eitan, the former Mossad and Shin Bet officer who died in 2019, confirms that he was the person who, in November 1985, ordered Israeli security officers to evict Pollard and his wife Ann from the grounds of the Israeli Embassy in Washington, to which Pollard fled when the U.S. Navy – for which Pollard worked, in an intelligence unit – and the FBI were in hot pursuit of him.
The Pollards succeeded in breaking into the compound in their car. “If we hadn’t removed him [Pollard, from the embassy],” writes Eitan, who was responsible for recruiting and handling the American, “officials in the United States – including the Jewish lobby – would have been compelled to remove him from there by use of force… Granting asylum to Pollard in the embassy, even for a few minutes, would have immediately caused an extremely serious diplomatic conflict between the countries, [and] not have prevented his arrest.”’

‘Eitan was hinting that he had been told to lie or not to tell the whole truth, and had refused. If so, I myself will try, in my words, to fill in what he was prohibited from saying. I do this with all humility and modesty, on the basis of Eitan’s short chapter about Pollard and on the basis of conversations I had with Eitan.’

‘Eitan wanted to write that not only is it permissible to spy on a friendly country, but that Israel has done so systematically since its establishment. The outstanding practitioner of this was the Bureau of Scientific Relations, known by its acronym Lakam, a secret intelligence unit in the Defense Ministry, set up by Shimon Peres when he was the ministry’s director general. Its brief was initially to secure the nuclear reactor at Dimona as it was being established – both in terms of physical security and preventing leakage of information – and to ensure the supply of equipment and materials for the project. Lakam was founded in 1957, and was long headed by Benjamin Blumberg. In time, Lakam’s missions were expanded and it became a unit of scientific-nuclear-technological espionage in the service of Israel’s military industries, the Israel Defense Forces and the state’s most secret scientific bodies: the nuclear reactor at Dimona, the Biological Institute in Nes Tziona and others.
A good many of the bureau’s operations were carried out on the soil of the United States, and Eitan was involved in some of them. The best known of his exploits – yes, of course, according to foreign reports – were the theft of the blueprints for the manufacture of centrifuges to enrich uranium from a plant in Germany (achieved with the assistance of future film producer Arnon Milchan, who was a Lakam operative); the theft of uranium from a facility in Pennsylvania; the theft of Congolese uranium from a Belgian company (with the aid of businessman Eliahu Saharov, another Lakam operative); and the smuggling of electronic devices from an American firm founded by Milchan for that purpose. Neither Milchan nor Saharov is mentioned in Eitan’s book; Blumberg’s name appears three times in passing.
In 1981, Blumberg was ousted by the defense minister, Ariel Sharon, and Eitan, who was Prime Minister Menachem Begin’s adviser on terrorism, was appointed to succeed him at Lakam.
“Sharon took advantage of a baseless complaint lodged against Blumberg by a person with business interests in order to remove Blumberg from his post and appoint me in his place,” writes Eitan. He was not especially perturbed about the wrong done to his predecessor and did not volunteer to fight for him after he got the appointment. That sentence tells us quite a bit about some key personality traits: self-interest, manipulation, exploitation of opportunities and adaptability, with no moral compass.’

‘Eitan fought in the War of Independence, and he was wounded by a mortar shell on May 15, the day after independence was declared, in one of the battles at Kibbutz Malkiya in the north. After the war, he decided that his rather nonconformist personality wasn’t suited to the army and joined the nascent Shin Bet security service. He was recruited by its chief, Isser Harel, who invited him to join him and his wife, Rivka, for dinner in their apartment on the third floor of a building on Jerusalem Boulevard in Jaffa, not far from Shin Bet headquarters. Harel, who had formerly been a plumber and contractor for installation of irrigation pipes, knew Eitan previously from work he had done in the orchards of Ramat Hasharon and Herzliya.
After the meal Harel walked Eitan out to the street and put him to a test, without the latter realizing it. Eitan relates that Harel said to him, “Do you see that apartment on the third floor? There, where the potted plant is? Let’s say you needed to enter it… without entering the stairwell and without touching the lock.” “I’d climb,” Eitan replied. “Climb from where?” Harel asked. “From here, from the drainpipe,” Eitan said, pointing to the pipe. “Show me,” the Shin Bet chief said. Eitan scrambled up quickly, “and within two minutes I was up there and in the third-floor apartment. I waved to him, and within a minute I was back down, standing next to him. ‘You’re hired,’ he told me.” It’s hard to believe, but that was an example of how candidates for service in the intelligence community were hired at the time – without personality tests, admissions committees, psychologists, sociometric tests, without having participated in complicated missions or writing tiresome reports. Eitan served in a wide range of posts in the Shin Bet and the Mossad, until his retirement in 1972.’

‘Eitan was undoubtedly a colorful character who, throughout his life, walked the line between permissible and impermissible and who was able to reinvent himself serially. After a rich and diverse career in the intelligence community, and after becoming a rich man whose wide-ranging business ventures extended from East Berlin and Uganda to the Caribbean Islands and Cuba – he landed in politics. At the age of 80 he headed the Pensioners Party, which became the sensation of the 2006 election, winning seven seats in the Knesset. Most of the party’s voters were fond of Eitan’s image: short, with a naughty smile, hearing aid and glasses with thick lenses. Perceived as the antithesis of the younger generation of leaders, he served in the government of Ehud Olmert.’

‘“Indeed, what is required is separation. I refer to a unilateral action to be initiated by Israel. An action that is not dependent on negotiations and does not entail agreement, because agreement will not be achieved in the foreseeable future. It’s always desirable to negotiate, but without any expectations. Not in this case. I don’t believe in uprooting Jews from their homes or removing Arabs from their lands.”’

Do we find here a depiction of the spy? ‘Self-interest, manipulation, exploitation of opportunities and adaptability, with no moral compass.’

Of just of quite a few human being?

This is what many of us do or try to do, some with less some with more charm.

In the world of spooks the distinction between friends and enemies is a detail (clearly, Carl Schmitt was not a spook), not a minor detail, but a detail.

Spying on friends is as common as spying on enemies.