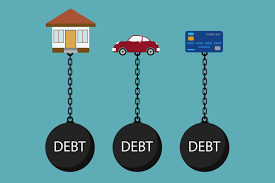 ‘Matthew C. Klein and Michael Pettis contend that trade wars – such as currently being conducted between China and the US, or Germany and Spain – are caused by inequality within states, leading to tension between states. The argument runs thus: international conflicts are triggered when, domestically, massive transfers of income are made to the rich, and to the companies they control, while the incomes of working people are either cut or remain stagnant. The way in which these transfers lead to trade deficits begins with the tendency of the rich to save, spending far less of their proportional income on goods and services than do the poor. If the incomes of a nation’s purchasers fall collectively and in relative terms, the consequence is that the population as a whole buys and uses fewer of the products manufactured by its economy. This under-consumption of production leads to the build-up of surpluses or gluts of, for example, washing machines, clothing, steel, or gas.
What to do with these surpluses? In the open, largely unregulated global economy the only outlet is for China, say, to export, or dump, its surpluses abroad. This allows the home economy to keep working at full capacity even while it victimizes the countries on which its products are dumped – a process known as “beggaring thy neighbour”.’

‘Along with China, Germany is a classic example of the economic model of under-consumption. With the fall of the Berlin Wall, poverty and insecurity in Germany rose, largely due to cuts in social welfare benefits and stagnating real wages brought on by the Hartz IV “reforms” introduced by Chancellor Gerhard Schröder in 2003. Tax cuts for high earners and the government’s “fanatical opposition to borrowing” (in the words of Klein and Pettis) for public investment shifted Germany’s purchasing power away from the majority and towards wealthy elites and their firms, which then spent far less than they earned. More than a quarter of the value generated by German workers and capital was sent abroad before 2008, mostly to Germany’s European neighbours. “German firms were able to avoid the stagnation in their home market by selling to customers in other countries. Profits rose dramatically as costs (wages) held steady and export revenues rose in line with global growth.” Countries like Spain absorbed German exports but, because of inequality and stagnant incomes at home, Germany did not reciprocate by importing and consuming Spanish imports in sufficient quantities. Hence the rise of tension in an increasingly divergent Europe.’

‘Yet, given the rise of inequality in the US, how to explain the conundrum of the country’s perennial trade deficits – the exception to Chinese and German surpluses? Klein and Pettis correctly explain that the US has become the dumping ground for world surpluses. This, they argue, is largely because of the world’s demand for US dollars (earned by selling stuff to the US) and due to the dollar’s status as the global reserve currency. The implication is that the US is a victim, rather than a voracious consumer of the world’s goods and services.
But presenting the US as a victim seems to be a case of dubious logic. Klein and Pettis are correct to say that there are severe economic downsides for ordinary Americans as a result of dumping and as a consequence of the world’s demand for US dollars. But global dollar hegemony is what the US demanded at the Bretton Woods Conference of 1945 – against J. M. Keynes’s strong advice for an independent Clearing Union for the world’s currencies.’

The old-fashioned resistance against borrowing and debts (remember Greece) is disastrous. Call it Calvinism, call it stupidity, call it righteousness, call if fear of inflation, the result remains a fairly big disaster.
Covid made the resistance disappear but I’m afraid this is only temporarily.

So there is underconsumption in among other places Germany, this might come as a surprise to those who believe that the Western world consist of nothing but consuming pigs.

This article is rather silent about the argument that we need to consume less in order to save the planet. But if this is the path forward it appears to be unavoidable that we will spread poverty. Less consumption always hurts the most vulnerable people in the most vulnerable countries first, let’s say workers in Bangladesh.

I would go a step further, stability is not a quality of anything that’s alive.

To be alive is to be instable, how much instability we can bear is the question. And the safety net that should provide the instable adventure of living with a plan B and plan C is of the essence, I agree.

We want to regulate the jungle. But keep in mind, the jungle will resist.