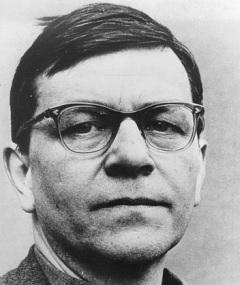 ‘To the extent that the German writer Peter Weiss is known in the US, it is for his verse play The Persecution and Assassination of Jean-Paul Marat as Performed by the Inmates of the Asylum of Charenton Under the Direction of the Marquis de Sade. Marat/Sade debuted in West Berlin in 1964 and quickly became a hit on the West End and Broadway, in a storied production by Peter Brook. With its fusion of radical politics and sexual provocation, it was a perfect theatrical starting gun for the Sixties.
Weiss took his cue from the historical fact that the Marquis de Sade spent the last years of his life in an insane asylum, where he sometimes put on plays with his fellow patients as the cast. Marat/Sade imagines one such performance in 1808, in which the patients act out the murder of the radical Jacobin Marat, which had taken place fifteen years earlier at the height of the French Revolution. But the real action is intellectual, as Marat and Sade debate the nature of revolution.’

‘Weiss was born in Germany in 1916, a year before the Russian Revolution, and over his lifetime he had seen its promise of liberation give way to terror and oppression, just like the French Revolution before it. For leftist intellectuals of his generation, the critical question was whether the Soviet experience had discredited the faith in revolution.
In Marat/Sade, Weiss is able to argue both sides of the question by splitting himself into two characters. In the end, however, Sade’s cynicism seems to triumph over Marat’s idealism. The fact that the entire play takes place in a madhouse underscores the sense that history itself is mad, that a rational and just society can never be made by creatures like us. “Everything I wrote or spoke/Was considered and true/Each argument was sound/And now/Doubt/Why does everything sound false,” laments Marat. The curtain falls on the inmates of Charenton rioting, as nurses try to beat them into submission and Sade watches it all with a smile.
Yet in 1965, the year after Marat/Sade premiered, Weiss published an essay in which he implicitly came down on the side of Marat—which meant, for him, on the side of communism.’

‘Yet The Aesthetics of Resistance, an enormous historical novel published in three volumes between 1975 and 1981, has at its core the same problem as the play: Is it possible to unite revolution and freedom, the common good and the individual imagination? The novel’s unnamed narrator, a young Communist with artistic ambitions, struggles mightily to serve both gods—to “match up,” in the words of one character, “the intensity of revolutionary artistic and political actions…the irony of the one with the seriousness, the sense of responsibility of the other.” The book is a search for the ideal named in its title: an art that equals the masterpieces of the past in complexity and power, while standing up against the unjust order that created those masterpieces.

The Aesthetics of Resistance has been hailed by German critics as a modernist epic comparable in stature to Ulysses and In Search of Lost Time. For all their difficulty, however, those books are much more inviting than Weiss’s. Joyce and Proust offer the reader sharply individualized characters, complex human relationships, dramatic set-pieces, and beautiful prose; Weiss eschews all these things on principle. True to its title, which sounds more like an academic treatise than a work of fiction, The Aesthetics of Resistance proceeds by means of long passages of argument and analysis, mainly devoted to Marxist interpretations of works of art and literature and to detailed recapitulations of internal debates on the European left in the early twentieth century.
Without a fairly advanced interest in these subjects, the most intrepid reader will make little headway with The Aesthetics of Resistance. Even the way it’s laid out on the page is uncompromising: there are no paragraphs or quotation marks, just one solid block of text for hundreds of pages. As Weiss once acknowledged to an interviewer, “I make it difficult for my readers.”’

‘How should the reader approach a book whose very title declares its resistance? One way to think about The Aesthetics of Resistance is as a bildungsroman, a story about the formation of a young person’s character. But the classic bildungsroman was an arch-bourgeois genre whose protagonist enjoys the education, resources, and freedom necessary to experiment with styles of life. From Goethe’s Wilhelm Meister to Mann’s Hans Castorp, Bildung, or spiritual development, involves breaking away from the middle-class family and its conventional definition of success, but only temporarily. In the end, after some adventurous years in an acting troupe or a mountaintop sanatorium, the hero is destined to rejoin the “real” world.
What would a proletarian bildungsroman look like? Is such a thing even possible? That is the challenge Weiss sets himself in his novel, which also follows a young man through a crucial period of experience and growth. In this case, however, the narrator is an outcast—a worker and a political subversive; and rather than fostering his education, the world does everything possible to hinder it. In addition to the “normal” obstacles of poverty and lack of education, he is living at a time of historical crisis that makes the idea of leisurely self-cultivation absurd.’

‘This tragic definition of resistance is the only one that makes sense to the narrator, living at a time when Communist hopes were continually defeated. Weiss’s Marxism has more in common with the paradoxical messianism of Walter Benjamin than with the scientific determinism of Marx himself. Indeed, Benjamin’s famous saying “There is no document of civilization which is not at the same time a document of barbarism” could serve as an epigraph for The Aesthetics of Resistance.
The promise of communism is that after the revolution, barbarism will be abolished and a true civilization will finally emerge. That’s what is supposed to have happened in Soviet Russia, which for the narrator is an ideological lodestar and a redoubt that must be defended at all costs. Yet he is frequently reminded that the Soviet reality doesn’t live up to this promise. Late in the first volume, for instance, Weiss describes a debate between two senior German Communists in Spain about purges in the party. According to Hodann, a doctor, the party has the right to eliminate dissenters: “A dissident opinion is a criminal opinion.” But Marcauer, a Jewish woman who declares, “I have been a member of the Communist Party since my teens,” denies that the party had the right to kill Andres Nin, the leader of Spain’s independent leftist party POUM. “The acceptance of such an occurrence revealed an attitude that made a mockery of our goals, swindling all those who had come to defend this country,” she protests. The justice of her stand is proved when she is immediately disappeared herself. But the narrator needs the party too much to protest its decisions: “We already knew that we would repress any thought of this woman,” he says affectlessly.
Marcauer seems to be Weiss’s invention, but most of the characters in The Aesthetics of Resistance are based on actual people whom Weiss either knew personally or discovered in the course of his research. The book includes a glossary identifying many of them, including Max Hodann, who mentored the young Weiss in Sweden. The narrator visits the Pergamon Altar with his friends Heilmann and Coppi, young Communists who were executed by the Gestapo in 1942 as part of the Red Orchestra resistance group. (Their death is recounted in the third volume of the novel.)’

‘In reality, Weiss’s family fled Germany in 1935 because his father was Jewish, a fact he had concealed from Peter. The Weisses went first to London, where they lived for almost two years, and then to Czechoslovakia. After Hitler’s annexation of the Sudetenland in late 1938, they drew on family connections to escape to Stockholm, where Weiss would spend the rest of his life. The story resembles that of many other Jewish-German refugees of the period; Anne Frank’s family made a similar flight, finding refuge in Amsterdam. The fact that the Germans invaded the Netherlands and not Sweden explains the difference between Anne Frank’s fate and Peter Weiss’s.
There is no obligation for Weiss’s narrator to be Jewish just because he was—after all, Proust made the same kind of change in his novel—but the erasure of this dimension of the story tends to falsify the novel’s understanding of Nazism and anti-Nazism. It is akin to the way postwar communism thought about Nazi war crimes, preferring to speak of fascists and antifascists rather than Germans and Jews. And it’s a reminder, among many others in The Aesthetics of Resistance, that communism’s promise of historical X-ray vision, the ability to see through to the inner logic of events, depends on a willingness to leave much of the truth in darkness.’

I admire Weiss as a playwright, ‘The Investigation’ is an extremely powerful play, it disappeared because the need to inform the public, at least the public that went to the camps, largely faded away.
No revolution without a lot of truth in darkness. The liberal democracy has a few dark corners as well. Unfortunately, this is also what all the conspiracy theorists claim, but their absurd exaggerations to put it mildly are far more dangerous than anything they hope to root out.

The revolution failed for many reasons, because it believed that the workers had no right to act against their interests. Unfortunately, we still see people who believe that the oppressed have no right to act against their interests.
People are entitled to do that. See under: John Locke.
It’s sad, but the alternative is killing your own citizens (and not a few) in order to keep the dream of human paradise alive.