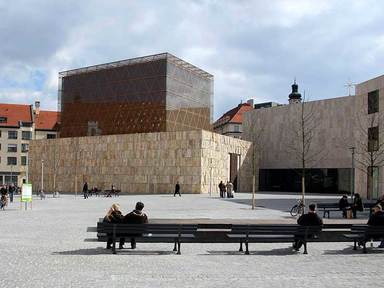 On the theorists in Bavaria – Annette Großbongardt in Der Spiegel:

‘But his most shocking experience came in May, he says, as he was walking his dog in the English Garden, Munich's vast urban park. "Suddenly, a guy came up to me on an old mountain bike and yelled: 'You shit Jews are to blame for this corona shit!' and 'You Jewish filth!'" When Brym ran in his direction, the man took off, says Brym. "On his T-shirt was 'Corona Denier' and 'Anti-Vaxxer,'" says Brym, a former university lecturer for philosophy and history.
The Department for Research and Information on Anti-Semitism (RIAS) in Bavaria registered more than 100 such anti-Semitic incidents in the state in 2020. The leader of RIAS in Bavaria, Annette Seidel-Arpacı, says there has been a "worrisome increase" in anti-Semitism among conspiracy theorists.
At one protest against the measures implemented to contain the coronavirus, according to RIAS, demonstrators held up a photomontage showing people being forcibly vaccinated by uniformed officials. The emblem on the uniforms strongly resembled the Star of David and bore the inscription "Zion." Seidel-Arpacı says that many events held by corona-truthers and other conspiracy theorists have included people wearing fake Jewish stars, essentially trying to portray themselves as the victims of discrimination. It represents a shocking relativization of the crimes committed against the Jews in World War II. "They are spreading the anti-Semitic narrative of an allegedly secret group that rules the world and which seeks to plunge 'the people' into misfortune," says Seidel-Arpacı.’

‘RIAS publishes all reported incidents on its Facebook page, assuming they have the permission of the victim. It makes for a disturbing narrative of hate and incitement, including a cyclist being yelled at in the middle of Munich: "Jewish swine!" In another incident, the phrase "Vaccination Sets You Free" was scrawled on a subway station wall, a reference to the famous "Work Sets You Free" sign at the entrance to Auschwitz and other Nazi concentration camps. The same slogan could be read on the mask of a corona-truther at a demonstration in Nuremberg.’

‘Last summer, Michael Movchin, 23, head of the Association of Jewish University Students in Bavaria, received an emailed death threat from an anonymous sender with the moniker "Anti-Jew." It read: "Shut your mouth you mass murderer and child fucker."
"Our association frequently receives anti-Semitic emails. We're used to it," Movchin says. "But this one referred to my private Twitter profile, meaning he researched me a little bit. It did give me an unpleasant feeling."’

‘Born in Munich in 1931, Knobloch survived the Holocaust because farmers hid her at their farmsteads. She has dedicated decades of her life to rebuilding the Jewish community in Germany – indeed, she has essentially spent her entire life trying to make Germany home to Jews again. Now, she is wondering "if Jews even have a future in Germany." It is a sentence full of bitterness. The reinvigorated anti-Semitism, the hostility: "It really weighs me down," she says. She herself has received so many death threats that "there isn't a nearby tree left from which I wasn't supposed to be hanged."
In 2012, at the peak of the debate over ritual circumcision, many Jews felt they were being unjustly accused of child abuse. "Do you still even want us Jews around?" Knobloch asked at the time. Today, she says: "I'm afraid that I now have to answer that question with no."’

The uncomfortable truth is that the ‘Querdenker-movement’ (querdenken means something like thinking outside the box) is infiltrated by the far right with obvious mythology, Jews are child abusers, the worst capitalists, behind the big pharmacy companies, behind the pandemic, et cetera.

To be skeptical means too often nothing else but to have found an easy scape goat, responsible for all that doesn’t go well in this world.

With or without an official religion, the desire to burn ‘heretics’ is huge.