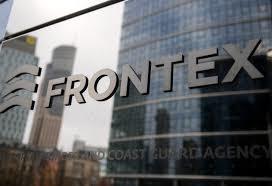 ‘For months now, Frontex, the EU’s border protection agency, and its head Fabrice Leggeri, have been embroiled in a series of scandals. Frontex has been accused of being involved in illegal repatriations of refugees at Europe’s external borders, workplace harassment and a possible case of fraud linked to the agency. Now the crisis has also reached the standing corps, the border management agency’s prestige project.
Frontex plans to deploy up to 10,000 border guards to the EU’s external borders in the coming years. The civil servants were promised brand new equipment and EU jobs with lavish salaries and European Commission President Ursula von der Leyen personally pushed for the creation of the standing corps. The stars of the EU flag sparkle on the sleeves of the new dark blue uniforms worn by the reserves.
The job may sound glamorous on paper, but it is anything but in the countries where the reserve guards have been deployed, like Greece, Croatia and Albania. Several officers have told DER SPIEGEL of a shortage of agency vehicles, such that expensive SUVs must be rented instead -- with officers allegedly even having to pay for gas themselves in some cases. They claim that expenses weren’t reimbursed for bureaucratic reasons, and that parts of the new uniforms were missing and had to be bought by the border guards themselves.’

‘The establishment of the standing corps is one of the EU’s most important migration policy projects. The purpose is to control irregular immigration. But now the European Commission and the member states must stand by and watch as it becomes the focus of ridicule.
The fiasco over the standing corps has become emblematic of an agency that has been falling short of public expectations for years, and of an agency head who is accumulating more and more power but doesn't seem to know how to use it correctly.
Under Leggeri, Frontex has stumbled from one scandal to the next. Last autumn, DER SPIEGEL, together with international media partners, first reported that Frontex forces in the Aegean Sea were involved in illegal repatriations of refugees, which are called pushbacks. The Frontex Management Board is investigating the allegations and the EU Ombudsman has opened an inquiry. Leggeri himself is apparently obstructing the investigations.’

‘The headquarters of Frontex are located in an office complex in Warsaw’s Wola district, not far from the city center. For years, only a few officials worked here compiling reports on migration routes. Actual border guards were borrowed from national police forces.
But the agency has grown from a budget of just over 6 million euros in 2005 to 460 million euros in 2020. By 2027, Europe’s taxpayers will have provided 5.6 billion euros in funding to the agency.
Frontex now has its own border guards, called the standing corps, in addition to aircraft and drones that will soon be complemented by unmanned airships that will provide surveillance as they circle over the Aegean Sea. Frontex’s rise has had a lot to do with Leggeri, the man who has done more than anyone else to shape the agency.
Leggeri, 52, was born in Mulhouse, in France’s Alsace region, and speaks fluent German. He studied at the École Nationale d'Administration in Strasbourg, a university that has long produced the French elite. Starting in 2013, he worked at the Interior Ministry in Paris in the department for irregular immigration. At the time, the government advocated for Frontex’s expansion, and two years later, Leggeri was named head of the agency.
Colleagues describe Leggeri as a technocrat. At a Christmas party once, the team gathered around and he began talking with great pathos about the achievements of the "Frontex family.” But Leggeri was reading from his notepad. "It seemed like the whole things was out of his league,” recalled one audience member.’

‘Frontex staffers have taken to calling Leggeri’s cabinet "France Télécom” when the bosses aren’t around. It’s a reference to the scandal at the French telecommunications authority, which involved systematic bullying and harassment so bad that it drove a number of employees to commit suicide.
The resentment felt by many Frontex staffers is largely directed at one of Leggeri’s closest confidants: Thibauld de La Haye Jousselin. The Frenchman comes from an aristocratic family from southern France. He once worked for Bernard Carayon, a member of the French parliament, who used to be part of a far-right student union. De La Haye Jousselin is a reserve officer in the French army and has a thing for the military and uniforms. "De La Haye Jousselin is clearly on the right politically," says someone who has known him for years. Now, he serves Leggeri as the head of his cabinet.’

‘A collection of images that appeared on screens here on the night of April 18-19, 2020, continue to occupy members of European Parliament until today. They come from a Frontex surveillance plane flying over the Aegean, according to several internal Frontex reports that DER SPIEGEL has obtained.
Shortly before midnight, Greek border patrol officers intercepted a rubber dinghy just north of the island of Lesbos and transferred the 20 to 30 refugees onboard their ship. According to prevailing law, they should have then brought the asylum-seekers to Lesbos, where they could apply for asylum. Instead, though, they put the refugees back into the dinghy and then towed them back toward Turkey.
Greek officials in the coordination center in Piraeus ordered the Frontex pilots to change course away from the dinghy. The Frontex team leader asked if there was a particular reason for the change in course. "Negative," came the response from the Greeks.
At 3:15 a.m., the Frontex plane began running low on fuel. The pilot took one last image, which showed the refugees alone at sea, a few hundred meters from the Turkish coast. No Turkish units were in the area, the pilot reported. The dinghy, he reported, had no motor and the Greek Coast Guard had sailed off. The refugees, including four children, were only rescued the next morning at 6:52 a.m. by the Turkish Navy.
The Greek Coast Guard has been systematically conducting pushbacks for several months. They stop refugee boats in Greek territorial waters and sometimes destroy their motors before then towing them back toward Turkey. "Aggressive surveillance," is the official term the government in Athens has come up with to describe the practice. In fact, it is illegal.
Frontex regulations require Leggeri to suspend missions when he learns of rights violations of a serious nature or that are likely to persist. His forces, after all, are supposed to protect human rights. But Leggeri insists that he has no reliable information about pushbacks in his possession – despite the fact that DER SPIEGEL and its reporting partners have exhaustively documented how Frontex units were nearby during at least seven illegal pushback operations.
During their operations, Frontex personnel are under the command of Greek border officials. Already last March, a Greek liaison officer ordered a Danish Frontex unit to abandon a group of intercepted refugees at sea, according to internal emails that DER SPIEGEL has reviewed. Nevertheless, Frontex decided nothing was wrong and closed the matter within a day. Later, in testimony he delivered before the European Parliament, Leggeri claimed the incident had merely been a misunderstanding.’

‘Frontex officials are actually required to report incidents where they suspect that human rights violations may have occurred, so-called "Serious Incident Reports." But such reports are hardly ever written. For years, Frontex officials have followed the example of their boss Leggeri: When in doubt, keep quiet.’

‘In Brussels, some refer to Leggeri as "Fabrice Teflon," with the Frontex boss having thus far survived despite accusations of mismanagement and allegations that his agency was involved in pushbacks. Now, though, the pressure has been cranked up.
European Commissioner Johansson has more or less made it clear that she no longer considers Leggeri to be tenable in his position. "It has been difficult to keep track of the missteps," says a high-ranking Commission official. "The priority must be on the long-term reputation of the agency. But it has been hard to reconcile recent actions with that aim."’

When in doubt, keep quiet.

Very much so indeed.

Leggeri is probably part of the big problem, but the more urgent problem is that a considerable part of the European populace couldn’t care less about human right violations and they are willing to applaud illegal push-backs. Of course, politicians have fanned the flames for years with passion, but the electorate remains responsible. The voters cannot say, if needed, ‘excuse us, we have been seduced.’

Open borders are not very realistic at the moment, but border controls within the framework of a democratic institute like the EU can only be effective and sustainable in the long-term when human rights are taken seriously.

Frontex is a huge stain on the EU, with most if not all member states as willing helpers of Leggeri and his men.