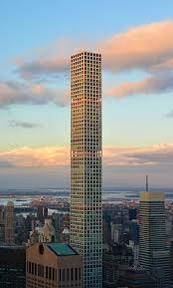 ‘The nearly 1,400-foot tower at 432 Park Avenue, briefly the tallest residential building in the world, was the pinnacle of New York’s luxury condo boom half a decade ago, fueled largely by foreign buyers seeking discretion and big returns.
Six years later, residents of the exclusive tower are now at odds with the developers, and each other, making clear that even multimillion-dollar price tags do not guarantee problem-free living. The claims include millions of dollars of water damage from plumbing and mechanical issues; frequent elevator malfunctions; and walls that creak like the galley of a ship — all of which may be connected to the building’s main selling point: its immense height, according to homeowners, engineers and documents obtained by The New York Times.’

‘The building, a slender tower that critics have likened to a middle finger because of its contentious height, is mostly sold out, with a projected value of $3.1 billion. The 96th floor penthouse at the top of the building sold in 2016 for nearly $88 million to a company representing the Saudi retail magnate Fawaz Alhokair. Jennifer Lopez and Alex Rodriguez bought a 4,000-square-foot apartment there for $15.3 million in 2018, and sold about a year later.’

‘Problems escalated from there, she said. There have been a number of floods in the building, including two leaks in November 2018 that the general manager of the building, Len Czarnecki, acknowledged in emails to residents. The first leak, on Nov. 22, was caused by a “blown” flange, a ribbed collar that connects piping, around a high-pressure water feed on the 60th floor. Four days later, a “water line failure” on the 74th floor caused water to enter elevator shafts, removing two of the four residential elevators from service for weeks.
Both events occurred on mechanical floors that have been criticized for being excessively tall — a design feature that allowed the developers to build higher than would otherwise have been permitted, because mechanical floors do not count against the building’s allowable size.’

‘One of the most common complaints in supertall buildings is noise, said Luke Leung, a director at the architectural firm Skidmore, Owings and Merrill. He has heard metal partitions between walls groan as buildings sway, and the ghostly whistle of rushing air in doorways and elevator shafts.
Residents at 432 Park complained of creaking, banging and clicking noises in their apartments, and a trash chute “that sounds like a bomb” when garbage is tossed, according to notes from a 2019 owners’ meeting.’

‘Some residents also railed against surging fees at the building’s private restaurant, overseen by the Michelin-star chef Shaun Hergatt. When the building opened in late 2015, homeowners were required to spend $1,200 a year on the service; in 2021, that requirement jumps to $15,000, despite limited hours of operation because of the pandemic. And breakfast is no longer free.’

‘But Ms. Abramovich, who, because of Covid-19 travel restrictions, has been living at 432 Park full time, said she wasn’t worried that resale value might suffer, because she didn’t buy the unit to flip for profit. For refusing to cover the recent increase in common charges, she said she faces $82,000 in late fees and interest — more than twice the median household income in the Bronx.
She’s aware that the plight of billionaires won’t garner much sympathy, but says she is speaking out on principle.
“Everything here was camouflage,” she said. “If I knew then what I know now, I would have never bought.”’

Plight is plight. We should be very straightforward about that.

And if you have a private restaurant to which you contribute $15,000.00 a year, free breakfast is not the right word.