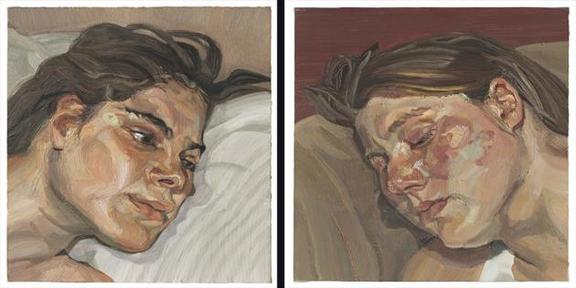 On the grandson, once more – Gopnik in The New Yorker:

‘Freud was a grandson of Sigmund, and a legendary figure in London—for gambling and love affairs—even before he was a first-rate painter. He is the subject of a two-volume biography by the British art critic William Feaver, “The Lives of Lucian Freud” (Knopf), the second volume of which, subtitled “Fame,” has just been published. (The first volume, subtitled “The Restless Years,” appeared in 2019.)’

‘His reputation in America was, at best, peripheral. “The realists, like the poor, will always be with us,” Robert Pincus-Witten, a don of American art, sighed.
Even within the British art establishment, Freud struggled against the tides. As Feaver reveals in the new volume, the Arts Council of Great Britain refused to include Freud in a 1974 group show, explaining that his work “represents the extending of traditions established well before 1960”—fatuous avant-gardism turned into bureaucratic fiat, rather as if the same council had refused to support the publication of poetry in rhyme, also a tradition established well before 1960. (The Arts Council may have done that, too, come to think of it.) In France, Freud’s art was regarded as at best an oddity, serving a general French suspicion that this is simply what the Brits look like without their clothes, and why they should put them back on.
Yet, as American art triumphalism cracked, Freud began to look much better. In 1989, Robert Hughes devoted a book, both brilliantly descriptive and shallowly polemical, to Freud’s painting, and to the insufficiently recognized importance of his “School of London,” which alone, Hughes maintained, had kept in place the central artistic principle of seeing and looking and investigating and recording.’

‘The interpenetration of these circles seems a sign less of Freud’s worldliness than of the kind of world that London offers: an equable, if often bad-tempered concord of tables, more companionable and less ideologically divided than New York, with right-wingers and left-wingers breaking bread, and spivs and earls sharing spaces, and people. Political and ideological differences are less hard-edged, sexual and erotic liaisons are more open-ended, and judgments about people are both more malicious (everyone’s motives are assumed to be sordid) and more tolerant (since everyone’s motives are sordid, self-righteousness is a bore). Less is expected, and less is received.’

‘A case can be made that Freud’s very best work is that of the fifties, when his hard-edged images of poignant futility hadn’t yet been overwhelmed by his appetite for expressing the same emotion exclusively in human fat. Indeed, one could argue that the real annus mirabilis of British painting came in 1954. It’s the year when Bacon painted “Two Figures in the Grass” and “Figure with Meat,” compressed pieces of enigmatic Larkinian melancholy, not yet inflated by his later grandiosity. And it’s the year when Freud painted “Hotel Bedroom,” a sad, simple scene of a man gazing at a (fully clothed) woman on a Paris hotel bed, as tense and suggestive as a Pinter play, and still hard to top in his work for emotional power.’

‘Freud’s sex life is too central to his existence and art for a biographer to ignore. Placed on a kind of proto-penicillin as a young man by a wary family doctor, as a prophylactic against the syphilis threatened by his constant adventuring, Freud went on to father, by legend, as many as forty children. To his contemporaries, his defection from the obligations of fatherhood seemed just one of those things. “Sometimes, instead of counting sheep, I count Lucian’s children,” one ex-lover says. In the new volume, one of his other lover-models quotes him: “Women were always taking children off him, he’d say, ‘Nothing to do with me they’re having children.’ ” And though she adds that this was “an outrageous thing to say,” she still had a child with Freud, who paid it scarcely any attention. Freud’s fascination for women is tellingly detailed in Celia Paul’s recent memoir, “Self-Portrait.” Paul, a first-rate painter herself who began an affair with him while she was his student, documents Freud’s mixture of cold indifference and sudden bursts of apparent affection. (“Lucian arrives with a huge bunch of yellow narcissi. I am trembling so much because of the unexpected gift that I can hardly lead the way up the stairs.”) Several of his neglected daughters, perhaps desperate for their father’s attention, became his models, posing nude in what used to be called “explicit” positions. One feels that one has no right to find this creepy, because the people who were engaged in it didn’t find it creepy, and yet one finds this creepy.’

‘Freud, as his love of Cézanne implies, was a Francophile, with favored louche Paris hotels, and yet his work, in the end, belongs to the art of his chilly island. National traditions in art are as real (and as labile under influence) as national traditions in cooking; that they alter does not mean that they do not exist. The British nude is as real as the British breakfast. Feaver quotes Ruskin’s counsel to “go to nature in all singleness of heart . . . rejecting nothing, selecting nothing and scorning nothing; believing all things to be right and good, and rejoicing always in the truth.” Freud, he allows, thought this seemingly irrelevant advice was “preachy yet sensible.” Cézanne, the old line had it, wanted to do Poussin over from nature—to make something with classical order but without the stock clichés of mythology. Freud wanted to do Cézanne over from candor—to make a fully realized art of dense contemplation and diligent inspection that did not wince or pause at a single human fold, wrinkle, or pelvic peculiarity.
Realism has many chapels. By the sixties, American art had taken up the Whitmanesque idea of the religion of real things, the belief that all ideas could be dissolved into actual objects, flags, and soup cans, and managed to achieve both its burlesque and its apotheosis. English painting asked a different question: What would happen if one took Ruskin’s demand seriously and applied it to modern painting? That was what the School of London tried to school us about. Rembrandt is grander, Cézanne is nobler—but, when it comes to the human animal qua animal, Freud has his own place. The old English question was what a realist art that rejects nothing human would be like, if you did it consciously and purposefully, even heartlessly, but without prejudice, and for a lifetime. Freud found out.’

What a well-written article, Gopnik outdid himself.

There is more than one novel, from the neglected daughters who become sitter, desperate for attention to the way with which Mr. Freud was once pooh-poohed in the US. Realists are like the poor; they will always be there.

I feel sympathy for the London art scene as described here, expect sordidness, be tolerant, self-righteousness is a bore. This still seems to me the basis of happiness and decency.

And for all of us, when sleeplessness hits start counting Lucian Freud’s children.