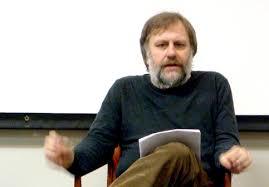 And now something on one of our foremost parodists – Becca Rothfeld in TLS:

‘Sobriety is the last thing we have come to expect from Žižek. The jacket blurb brags that he is “the most dangerous philosopher in the west”, and he is usually also one of the most entertaining. The author of countless blockbusters and star of several films, he is renowned for his stylized negativity – he once told the Guardian that what depresses him most is “seeing stupid people happy” – and performative dishevelment. It can be difficult to tell whether Žižek is a parodist or proponent of the dense Lacanian and Marxist theory he champions in print and in viral videos. Most likely, he is both. In one clip from Sophie Fiennes’s documentary, The Pervert’s Guide to Cinema (2006), presented by Žižek, he gestures at a bed of tulips. “My relationship to tulips is inherently Lynchian. I think they are disgusting”, he snarls. “I mean, basically it’s an open invitation to all insects and bees … I think that flowers should be forbidden to children.” At his best, Žižek is more of a performance artist than he is a philosopher. It is therefore unsurprising that Pandemic! is, even by its own admission, somewhat lazily constructed.’

‘He concludes that “the state should directly intervene in the same way as it intervenes in conditions of war when thousands of guns are needed”. The upshot is that we – and especially those of us living in the dystopia James Baldwin once called “an adventure in real estate”, namely the United States – need to adopt reforms often denigrated as “communist” by detractors.
That Pandemic! is digressive and derivative is only to be expected. What is unforgivable is that its conclusions are so sensibly presented. Still, it might be argued, better Žižek’s newfound earnestness than the unconscionable callousness of the Italian theorist Giorgio Agamben, who has suggested, with absolute seriousness (and absolute self-importance), that we sacrifice the elderly to the virus.’

‘In Pandemic!, there are brief outbursts of vintage Žižek, as when he celebrates the closure of institutions he has always found distasteful. “Good riddance” to cruise ships, he effuses. “Amusements are turning into ghost towns – perfect, I cannot imagine a more boring and stupid place than Disneyland.”’

The Unites States, an adventure in real estate, that’s a great quote. Thanks, Baldwin. I had missed that.
‘The pervert’s guide to cinema,’ is fantastic, I will watch it again, as soon as I’m done with a rather strange series on Hitler’s bodyguards.
As to Agamben, he has become the favorite bête noir of 2020 and 2021, and sure enough, he has said some strange things about COVID-19, but who hasn’t? Above all, quite a few decent people or at least people with more or less decent jobs, philosophers, doctors, etcetera have argued, for example in the Netherlands, that some of the elderly (with diseases like obesity) could be sacrificed for the health of all society.

It was naïve to believe that human sacrifice would disappear, but in the old age it were the young and for that reason the more or less beautiful who were slaughtered in combat, from the ancient Greek to let’s say Vietnam.
You need aesthetics in order to honor the human sacrifice, the ancient Greek knew that very well, the army still knows that, even the Bible teaches us how important aesthetics is. Sure, Abraham managed to outwit God and he did not sacrifice his son. Please, be aware that this is one of the best told maybe the best told stories in the Bible, Old and New Testament. It’s aesthetics that makes the human sacrifice palatable, at least less unbearable.