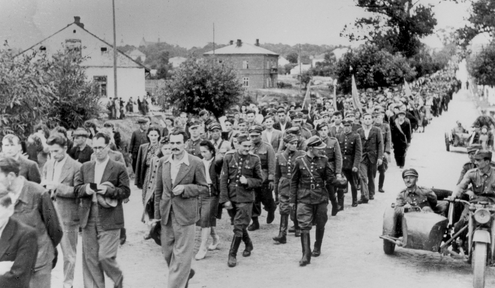 On cleaning up your history – Andrew Higgins in NYT:

‘MALINOWO, Poland — From a forest on the edge of this tiny village in eastern Poland, a distant and mostly forgotten local horror is reverberating widely. It has cast a pall over the 30 villagers who live nearby, reached into a courtroom in Warsaw, and is now radiating distress around the world over the rewriting of Holocaust history.
The case has its roots in the Nazi occupation of Poland during World War II, when terrified Jews took shelter in the forest and, according to a survivor cited in a recent Polish study of the Holocaust, were murdered there after the wartime mayor of Malinowo, a Pole, told the Nazis of their hiding place.
That horror, however, has now resurfaced, revived by a libel suit against two scholars who edited the study and who stand accused of besmirching the honor of the long-dead mayor and the Polish nation. A verdict in the case, which was brought by the elderly niece of the mayor with support from bodies funded in part by Poland’s government, is expected Tuesday.
The targets of the libel action are Jan Grabowski, a Polish-Canadian history professor at the University of Ottawa, and Barbara Engelking, a historian with the Polish Center for Holocaust Research. Together they edited “Night Without End,” a 1,700-page 2018 study on the role played by individual Poles in aiding Nazi murder.’

‘The Polish government denies any involvement in the libel case. But it helped make it possible by amending the law in 2020 to waive court costs for all cases connected with “the struggle of the Polish Nation against Nazism and Communism.” In a sign that the libel suit is not an isolated incident, the police in eastern Poland recently summoned the editor of an online site about Jewish life to ask why she had “insulted the Polish nation” by writing that “Polish participation in the Shoah is a historical fact.” Before it was invaded in 1939 by Nazi Germany and the Soviet Union, Poland had Europe’s largest Jewish population. As the war expanded and Hitler turned on his erstwhile Soviet ally, conquered Polish lands became the focus of the Nazis’ Final Solution, with around three million Jews — half the total number killed across Europe — murdered in Poland, mostly in death camps like Auschwitz and Treblinka.’

‘This pride, however, has taken on an aggressive, intolerant edge since the Law and Justice Party took power in 2015. It has sought to criminalize any questioning of Polish wartime heroism and poured money into research groups and museum projects that present Poland as Europe’s perpetual and entirely blameless victim, a “Christ of Nations” repeatedly crucified by foreign powers.
Walentyna Golaszewska, a 64-year-old resident of Malinowo, said she grew up hearing stories about how her grandparents had taken food to Jews hiding in the forest. She was shocked to learn that the then-mayor, Edward Malinowski, has now been accused of aiding their murder.
“I thought this whole thing would have gone away with my grandfather’s generation. It all happened over 70 years ago and everyone is now dead. None of us can really know the truth,” she said.'

If a people elect a government that cherries the idea that their country is a ‘Christ of Nations’ you should not be surprised that the lawmakers will try to silence anybody who might happen to disagree with this belief, needless they will also stifle the study of history.

Unfortunately, Poland is not alone, the extreme-right almost everywhere believes in the eternal innocence and eternal greatness of their respective countries.

The attempt to shame everybody into guilt and thus obedience is counterproductive and slightly reprehensible as well.

It’s a thin line to walk, apparently too thin for many people.