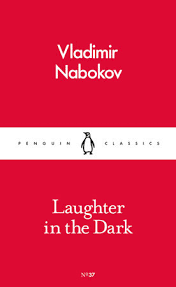 On translating your own work and rewriting it – John Colapinto in The New Yorker:

(While doing some research on one of my favorite novels ‘Laughter in the Dark’ by Nabokov I stumbled upon this article from seven years ago):

‘At the age of thirty-one, living as a penniless exile in Berlin, Vladimir Nabokov composed, in Russian, a novel called "Camera Obscura," which he published serially in an émigré journal in 1930. Five years later, the book was translated into English by a woman named Winifred Roy, for the British publisher John Long. But Nabokov claimed that Roy's translation was “sloppy” and “full of blunders” and, when approached by a publisher about an American edition in 1938, he chose to retranslate the novel himself. The new version (Nabokov’s first English literary production), which he retitled "Laughter in the Dark," is a masterful short novel about an older man's obsession with a young girl, and is today considered an important precursor to "Lolita."
I'd always been curious to know how extensively Nabokov revised "Camera Obscura" when turning it into "Laughter in the Dark." The mastery of the latter suggested that it was a considerably more mature Nabokov who dreamed up, for instance, the insouciant opening paragraph of “Laughter,” which, by giving away the story, alerts readers that the novel is about more than narrative suspense: Once upon a time there lived in Berlin, Germany, a man called Albinus. He was rich, respectable, happy; one day he abandoned his wife for the sake of a youthful mistress; he loved; was not loved; and his life ended in disaster.
Did Nabokov come up with these lines in his original Russian version, which he hastily scribbled in six months?’

‘I knew that there were differences between the two editions. In his 1990 biography of Nabokov, Brian Boyd wrote that Nabokov had “revamped the opening,” “improved the mechanism by which hero meets villain,” and “redesigned the means by which hero discovers the villainy of villain and heroine.” David Rampton’s excellent 2012 book, “Vladimir Nabokov: A Literary Life,” provided more detailed insight. But I wanted to know precisely how Nabokov had “revamped” and “improved” the original, and why.
The obvious solution would be to buy or borrow a copy of Roy's translation and compare it to Nabokov's, but that’s almost impossible to do. “Camera Obscura” sold only a handful of copies upon its release, and the London warehouse containing the unsold stock was destroyed by German bombs during the Second World War. (According to the French scholar Christine Raguet-Bouvart, only seven copies still exist, all in rare-book archives and private collections across the globe.)’ (…)

‘So I finally resolved to visit the copy held in the New York Public Library’s Berg Collection, which houses Nabokov’s papers and is open only to credentialed Nabokov scholars. My ancient master’s thesis on his English-language novels and a mumbled story about a research project on "Laughter in the Dark" won me an appointment, and on a recent day I visited the Berg’s frigid reading room on the fifth floor of the library's main branch.’

‘Then, when I turned the page and saw a few scribbled words in that same blue pen in the margin, I realized with slow amazement that this copy of “Camera Obscura” was not simply a rare edition procured by the Berg to round out Nabokov’s archive; it was Nabokov’s personal copy—the very copy in which he had revised virtually every page of Roy’s version in a storm of handwritten additions, crabbed interlineations, carat-sprinkled paragraphs, and bursts of inspiration.
Nabokov was notorious for never showing early drafts of his work to journalists or scholars. He compared doing so to "passing around samples of one's sputum," and he was careful, in his constant grooming of his Olympian public image, to leave no embarrassing first drafts for posthumous study. The one exception was his embryonic version of "Original of Laura," which was left uncompleted after Nabokov’s death, and which he had instructed his widow, Vera, to destroy. She couldn’t bring herself to do so and, some years after she died, their son, Dmitri, allowed the unfinished book to be published.’

‘Nabokov had an unsurpassed sense of a story’s structure, and the “Camera Obscura” revisions reveal his growing mastery, in the nineteen-thirties, of form, proportion, and pace. Clearly aware that the cancelled Robert Horn and Cheepy opening was too slow, too flabby, too far off the novel’s central themes, Nabokov seized on a single phrase on page fifteen of the Roy version—an aside about Albinus’s idle musings about financing a film “of a picture by Rembrant or Goya.” Nabokov moves this to the beginning and expands it into a long, strikingly visual paragraph about an animated Bruegel that sweeps the reader into the story. He brings in the villainous Axel Rex not as a victim of copyright infringement but as a celebrated New York-based satirical cartoonist who might be able to execute Albinus’s dreamed-of animated film. Rex is interested, but instead of celebrating this coup, Albinus, when the book opens, is in a state of “irritation, confusion and misery” over a certain young usher he had glimpsed in a movie theatre. (Only later do we learn that Rex and Margot had had a romance years before—a romance that they soon resume on the sly, deceiving Albinus.) This revised first chapter is a model of narrative ingenuity—a sleekly moving seven pages that introduces us, with seeming effortlessness, to the story’s main characters, and to the central plot of marital infidelity.’

‘In “Camera Obscura,” the thirty-one-year-old Nabokov concocted a clumsy device by which Albinus learns of his betrayal at the hands of Rex and Margot: he introduces a writer, Segelkranz, who reads to Albinus a short story about a man with a toothache who, during his dental torment, overhears a pair of lovers discussing their betrayal of an unsuspecting man. Through internal clues in the story, it is realized that the lovers in Segelkranz’s story are none other than Rex and Margot—a reveal that manages to be implausible, strangely inept, and deeply boring: it drags on for fifteen pages. In “Laughter,” Nabokov sends Segelkranz the way of Cheepy, replaces him with the amusingly curmudgeonly author Udo Conrad, and simply has Conrad overhear the two lovers cooing to each other behind Albinus’s back.’

But it’s interesting to see how a first-rate novel can grow out of a second-rate one. (Needless to say, usually nothing grows out of s second-rate novel.)
And that style can solve man problems, but the economy of storytelling (distribution of information to the readers, distribution of information to the characters), the structure of the story cannot be redeemed by style alone.

And of course, the villain is the true hero.