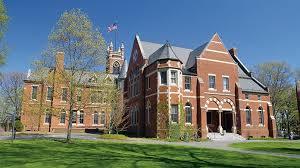 On victims, perpetrators and the grey zone in between – Michael Powell in NYT:

‘In midsummer of 2018, Oumou Kanoute, a Black student at Smith College, recounted a distressing American tale: She was eating lunch in a dorm lounge when a janitor and a campus police officer walked over and asked her what she was doing there.
The officer, who could have been carrying a “lethal weapon,” left her near “meltdown,” Ms. Kanoute wrote on Facebook, saying that this encounter continued a yearlong pattern of harassment at Smith.
“All I did was be Black,” Ms. Kanoute wrote. “It’s outrageous that some people question my being at Smith College, and my existence overall as a woman of color.” The college’s president, Kathleen McCartney, offered profuse apologies and put the janitor on paid leave. “This painful incident reminds us of the ongoing legacy of racism and bias,” the president wrote, “in which people of color are targeted while simply going about the business of their ordinary lives.”’

‘Less attention was paid three months later when a law firm hired by Smith College to investigate the episode found no persuasive evidence of bias. Ms. Kanoute was determined to have eaten in a deserted dorm that had been closed for the summer; the janitor had been encouraged to notify security if he saw unauthorized people there. The officer, like all campus police, was unarmed.’

‘This is a tale of how race, class and power collided at the elite 145-year-old liberal arts college, where tuition, room and board top $78,000 a year and where the employees who keep the school running often come from working-class enclaves beyond the school’s elegant wrought iron gates. The story highlights the tensions between a student’s deeply felt sense of personal truth and facts that are at odds with it.’

‘“My perception is that if you’re on the wrong side of issues of identity politics, you’re not just mistaken, you’re evil,” said James Miller, an economics professor at Smith College and a conservative.
In an interview, Ms. McCartney said that Ms. Kanoute’s encounter with the campus staff was part of a spate of cases of “living while Black” harassment across the nation. There was, she noted, great pressure to act. “We always try to show compassion for everyone involved,” she said.
President McCartney, like all the workers Ms. Kanoute interacted with on that day, is white.’

‘The atmosphere at Smith is gaining attention nationally, in part because a recently resigned employee of the school, Jodi Shaw, has attracted a fervent YouTube following by decrying what she sees as the college’s insistence that its white employees, through anti-bias training, accept the theory of structural racism.
“Stop demanding that I admit to white privilege, and work on my so-called implicit bias as a condition of my continued employment,” Ms. Shaw, who is also a 1993 graduate of Smith and who worked in the residential life department, said in one of her videos. After months of clashing with the administration, Ms. Shaw resigned last week and appears likely to sue the school, calling it a “racially hostile workplace.” Her claims drew headlines from Fox News to Rolling Stone this week. Alumni, faculty and students continue to debate the issue. All of this arose from the events of July 31, 2018.’

‘A janitor, who was in his 60s and poor of sight, was emptying garbage cans when he noticed someone in that closed lounge. All involved with the summer camp were required to have state background checks and campus police had advised staff it was wisest to call security rather than confront strangers on their own.
The janitor, who had worked at Smith for 35 years, dialed security.
“We have a person sitting there laying down in the living room,” the janitor told a dispatcher according to a transcript. “I didn’t approach her or anything but he seems out of place.” The janitor had noticed Ms. Kanoute’s Black skin but made no mention of that to the dispatcher. Ms. Kanoute was in the shadows; he was not sure if he was looking at a man or woman. She would later accuse the janitor of “misgendering” her.’

‘“This is the racist person,” Ms. Kanoute wrote of Ms. Blair, adding that Mr. Patenaude too was guilty. (He in fact worked an early shift that day and had already gone home at the time of the incident.) Ms. Kanoute also lashed the Smith administration. “They’re essentially enabling racist, cowardly acts.” Ms. Blair has lupus, a disease of the immune system, and stress triggers episodes. She felt faint. “Oh my God, I didn’t do this,” she told a friend. “I exchanged a hello with that student and now I’m a racist.” Ms. Blair was born and raised and lives in Northampton with her husband, a mechanic, and makes about $40,000 a year. Within days of being accused by Ms. Kanoute, she said, she found notes in her mailbox and taped to her car window. “RACIST” read one. People called her at home. “You should be ashamed of yourself,” a caller said. “You don’t deserve to live,” said another.’

‘Ms. McCartney offered no public apology to the employees after the report was released. “We were gobsmacked — four people’s lives wrecked, two were employees of more than 35 years and no apology,” said Tracey Putnam Culver, a Smith graduate who recently retired from the college’s facilities management department. “How do you rationalize that?” Rahsaan Hall, racial justice director for the A.C.L.U. of Massachusetts and Ms. Kanoute’s lawyer, cautioned against drawing too much from the investigative report, as subconscious bias is difficult to prove. Nor was he particularly sympathetic to the accused workers.
“It’s troubling that people are more offended by being called racist than by the actual racism in our society,” he said. “Allegations of being racist, even getting direct mailers in their mailbox, is not on par with the consequences of actual racism.”

As for Ms. Blair, the cafeteria worker, stress exacerbated her lupus and she checked into the hospital last year. Then George Floyd, a Black man, died at the hands of the Minneapolis police last spring, and protests fired up across the nation and in Northampton, and angry notes and accusations of racism were again left in her mailbox and by visitors on Smith College’s official Facebook page.
This past autumn the university furloughed her and other workers, citing the coronavirus and the empty dorms. Ms. Blair applied for an hourly job with a local restaurant. The manager set up a Zoom interview, she said, and asked her: “‘Aren’t you the one involved in that incident?’” “I was pissed,” she said. “I told her I didn’t do anything wrong, nothing. And she said, ‘Well, we’re all set.’” She talked to a reporter recently from a neighbor’s backyard, as a couple of hens wandered the patio.
“What do I do?” she asked, shaking her head. “When does this racist label go away?”’

The idea that being born into a certain group makes you guilty or at least more prone to certain types of undesirable behavior has been abhorrent, is abhorrent and will always be abhorrent.

In a culture where pain is capital many people will try accumulate this specific kind of capital, with all sorts of unwanted consequences.

The whole concept of radical listening reminded me of The Soviet-Union. (‘The administration declined to challenge the student protesters and had the instructor submit to sessions of “radical listening” with the protesters. In the end, the religious studies department dropped the class.’) And we know how that ended.

Where pain is capital, the most valuable capital maybe, people will feign pain. Where facts are not needed to establish guilt the corruption has already won, absurdities turned into dogmas, a belief system replaced reality.