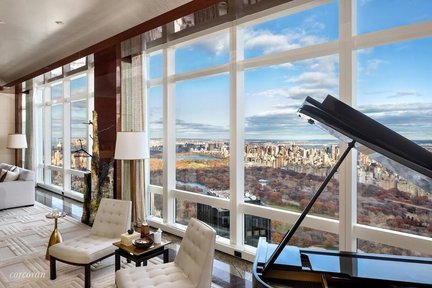 On real estate and embeddedness – Nick Paumgarten in The New Yorker:

‘Four years ago, during a three-month artist’s residency in Brooklyn, Andi Schmied, a photographer from Budapest, visited the Empire State Building and was surprised to see so many taller skyscrapers. She immediately wanted to shoot photos from their top floors, but she quickly learned that these glass minarets were mostly new luxury residences—private in the extreme. “What is my way to get in?” she wondered.

Schmied, then thirty, decided to impersonate a prospective buyer or renter, a Hungarian billionaire named Gabriella Schmied. (Gabriella is her middle name, so her passport sufficed as I.D.) To fill the role of husband, she recruited a friend from Budapest, an art and book dealer named Zoltan. She worked up a backstory: Gabriella, architect, moving to the States with toddler son, owing to Zoltan’s work. She invented an imaginary assistant named Coco, blew her art-residency materials budget on a credible outfit, made a list of fancy buildings, and, with the selling agents demonstrating no real inclination for due diligence, bluffed her way into some of the planet’s loftiest, most expensive apartments.’

‘“ ‘Timeless yet contemporary’: this expression, whatever the hell it means, I heard in every single apartment,” she said. “The agents try to make the buyer feel that this apartment is the most unique thing you’ve ever seen. Everything is ‘handcrafted’ or ‘hand-selected,’ but the fact is these apartments are all the same.” Just about every one had, as its crowning indulgence, a soaking tub in front of a floor-to-ceiling window. The view, always stunning, even when it was obscured by clouds, often contained other new luxury towers, but the agents never called attention to them. They spoke of the Chrysler Building and the Empire State, or the fact that one could see planes taking off from all three major airports. “They talk about their own buildings as the most amazing thing on the planet,” Schmied said. “And yet they never mention them as something you would like to look at.” Addressing her, the agents focussed on emotional fulfillment. To Zoltan, they emphasized return on investment. They tended not to mention that thousands of these apartments remained unsold. (One agent, on learning that she’d made a sale, jumped up and down, and hugged a construction worker, as she and Schmied, in hard hats, made their way in a hoist elevator to the as yet unfinished hundredth floor. “You better act fast,” the agent told her.) But the agents considered it a selling point that most of the apartments that had been sold remained empty, because they were investments—“a new global currency,” as Schmied said.
“I will always remember the surprise on their faces when I said I actually wanted to live there.’

This project made me slightly jealous I have to admit.

Embedded in high-end real estate as some anthropological investigation. Who doesn’t want to do that?

But the most interesting part, nobody wants to live here, nobody is supposed to live there. High-end real estate above the clouds of Manhattan, the other bitcoin.