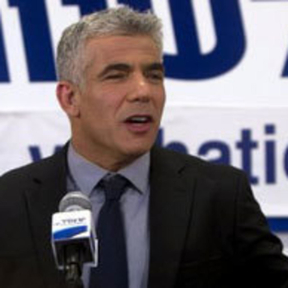 On another round of elections – Anshel Pfeffer in Haaretz:

‘The Yesh Atid leader worries Netanyahu. Next week is the 28th anniversary of his first election as Likud leader, when he easily beat two vastly more experienced politicians in David Levy and Moshe Katsav. And next week will be the 10th time Netanyahu leads Likud in a Knesset election (equaling the record set by Menachem Begin, who led the party and its predecessor in Israel’s first 10 elections). But in all of his political battles for the Likud leadership and the prime ministership, Netanyahu has never faced a challenger with a more meager public record than Lapid.

Netanyahu was never afraid to take on members of the founding generation like Yitzhak Rabin and Shimon Peres, or celebrated generals – though he hasn’t always won.
Those who did beat Netanyahu – Ehud Barak, Ariel Sharon and Ehud Olmert – didn’t do so because they held more impressive CVs. They won by sticking to a coherent strategy that had been prepared for them. Netanyahu lost when he faced challengers who allowed serious professionals to run their campaigns (Stan Greenberg for Barak, and Reuven Adler for Sharon and Olmert).
This is exactly how Netanyahu won for the first time in 1996, when he became prime minister at the age of 46. He beat Peres, one of the great builders of Israel, even though the height of his own political career had been deputy foreign minister. He won by following strategist Arthur Finkelstein’s plan to the letter.
Netanyahu believes that Lapid is acting in this campaign just as he himself did 25 years ago. The centrist is faithfully executing the plan of his Democrat pollster from Washington, Mark Mellman.
Lapid is fanatically obeying Mellman’s orders, keeping a low profile and not allowing himself to be dragged into combat with the Likud war machine, targeting only the objectives Mellman set out with his preprepared messages. And it’s working.’

‘In Israel, there is no devastatingly effective and ruthlessly professional campaigner like Netanyahu. Perhaps not anywhere in the world. And he knows that for the first time in 12 years, since Olmert left the scene, he is facing another professional. That is why Netanyahu spent the recent months of lockdown wisely, studying his rival, carrying out research, forming messages and testing them on focus groups. Now that he is finally on the campaign trail, his stump speech is perfectly built around Lapid’s vulnerabilities.
There is, of course, also a tactical reason for focusing on the “leftist” Lapid rather than Sa’ar, who is Likud flesh and blood, and cannot be seen as a real rival. Netanyahu always wants his campaigns to be about him facing the left. But to make Lapid his target, Netanyahu had to invest time and resources.
Lapid was already a target in the past three elections, when Netanyahu tried to portray him as Gantz’s puppet master. But Lapid is no longer just a convenient lightning rod. He has become the real enemy, which is why Netanyahu has completely changed his attitude toward him ahead of Tuesday’s election. In the past three ballots, when Gantz was the enemy, Netanyahu framed Lapid as a clever and devious figure, manipulating naive Benny. Now he’s the main challenger, Netanyahu is doing everything to ridicule and belittle Lapid as a useless dilettante. And by doing so, ultimately paying him respect.’

‘Netanyahu peppers the speech with reminiscences of his time in the elite Sayeret Matkal commando unit 50 years ago, comparing his military record with that of Lapid, who served as a reporter on the IDF’s magazine. Interestingly, though Netanyahu also boasts of his studies at the prestigious Massachusetts Institute of Technology, he doesn’t actually make the comparison to Lapid’s lack of a formal education. It seems that mocking someone for not finishing high school or going to university didn’t play well with the focus groups of potential Likud voters.’

‘His more specific promises also contain hints and threats. He pledges, in the first meeting of his new cabinet, to pass a 15-billion-shekel ($4.5 billion) stimulus package. If only he could pass it immediately, he says. He lists “all the bakeries, garages, cosmeticians, falafel stands,” the furloughed workers and their employers, being denied the funds they desperately need. “They tell me, legal advisers [here he uses the Hebrew word that also means ‘attorney general’ – Attorney General Avichai Mendelblit indicted him on the corruption charges Netanyahu never mentions in his campaign speeches], frustrated politicians, that it’s ‘election economics.’ Interesting. When I brought vaccines to save lives, they didn’t say it was ‘election medicine.’ So why do they say it when I try to save businesses that people invested their lives in? They’re the ones doing cynical ‘election economics.’” Just like with the media, Netanyahu is saying that the attorney general is also actually a politician and his day of reckoning will come after the election.
Fifteen billion shekels is just the beginning. “In the coming year,” Netanyahu vows, “I’m going to focus on the economy and transform Israel into the country with the fastest growth in the world.” Another Netanyahu promise (in the last three elections he also promised to annex parts of the West Bank, something that has since been airbrushed out of memory), but why is he fixated on doing it within a year? The fastest growth in the world would be an incredible achievement even if takes five years.
Netanyahu is trying to plant in the minds of voters that because of the vaccines he secured, Israel now has a short window of opportunity to “shoot the economy upward” – and therefore it’s critical that he be allowed to focus on that mission over the next year. This is the closest Netanyahu comes in his speech to referring to his corruption trial, which is set to resume just 13 days after the election with the testimony of the first witness for the prosecution. Netanyahu may be required to sit and hear these witnesses three times a week, but he has no intention of wasting his time in Jerusalem District Court. In the “coming year,” he must be allowed to dedicate himself to growing the economy.
Netanyahu is making clear that if he wins, he is going to get rid of the attorney general, who is actually a politician, and the meddlesome media, which is a political party, and continue serving the nation like Yair Lapid never could.’

In a few days there will be the fourth election in Israel in two years, as Adam Rasgon pointed out in NYT, mainly because of the personal interests of Mr. Netanyahu. (“I don’t know any serious thinker who says Israel is going to another round of elections for reasons other than Netanyahu’s personal interests,” said Gayil Talshir, a professor of political science at the Hebrew University of Jerusalem.) Read the article here.

We see also in Israel the diminution of the left. Labor may not make it above the 3.25% threshold to enter Knesset. Another tradition leftist party Meretz is on the verge of non-existence.

Lapid is many things at the same time, but I would not call him a leftist.

The world largely lost interest in the region, in the Palestinians, in Israel, in the oddity from the past, this thing called peace process.
Israel became Pakistan. A democracy and a failed state at the same time, most people don’t care. (I would rather live in Israel than in Pakistan, but that’s beside the point.)
The Biden-administration is harking back to the Obama-years, with two-state-solutions and 1967-borders, which sounds morally just but this is in reality as absurd as the Trump peace plan.

Netanyahu turned its country into his personal playground. Fair enough, he doesn’t like war very much, a minor consolation.