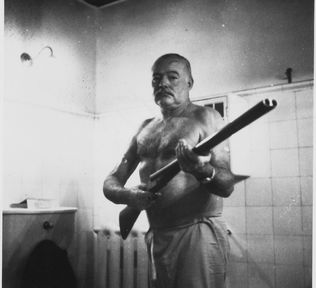 On Hemingway – Gal Beckerman in NYT:

A friend wrote: ‘ ‘I thought this was a good point.’

He was referring to this article by Gal Beckerman in NYT on Hemingway:

‘But he is so important as a literary figure and in terms of his influence that to ignore him seems to just avoid the problem.’

‘The alcoholism; the womanizing; the not-so-subtle anti-Semitism and racism; the many, many shot lions and elephants — it’s all there. But there is also reverence for his literary gifts, a desire to remind us of them and even introduce new dimensions, such as Hemingway’s apparent interest in gender fluidity.’

Yes, too important to ignore.

Which also means, we cannot ignore people just because their behavior, their opinions are in conflict with our moral convictions.

Too often morality is just an excuse to rip up and kill.