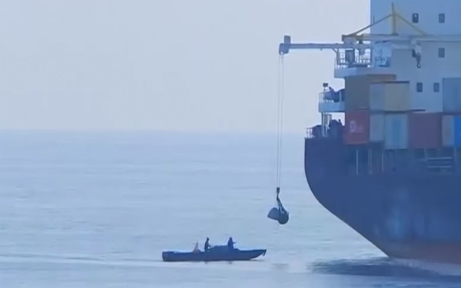 On Iran – Amos Harel In Haaretz:

‘The attack on Tuesday that was attributed to Israel, in which an Iranian ship in the Red Sea was damaged by a mine, was not a routine operation. It differs from its predecessors in the nature of the target, the timing and in terms of its context.
The ship that was hit, the Saviz, was originally a freighter. According to companies that analyze shipping data, it has spent most of its time in recent years in the area in which it was attacked, between the coasts of Yemen and Eritrea. Western intelligence sources say the vessel belongs to the Iranian Revolutionary Guards and that it serves as a mother ship – a maritime command post of sorts, a floating military base that’s responsible for intelligence and commando operations. The ship is equipped with speedboats and cranes with which to lower the boats into the water.
The Saviz is thought to have supplied Iranian assistance to the Houthi rebels in Yemen during the civil war that’s going on there, as well taking part in operations targeting neighboring Saudi Arabia. The ship provides the Revolutionary Guards with a permanent presence in a region that is sensitive for Iran – a main shipping route linking it (and the countries of Central and East Asia) to the Mediterranean Sea and Europe.’

‘he New York Times reported that Israel informed the United States about the attack immediately after it took place. It’s hard to believe that this was a coincidence. The announcement of the attack is a signal that Israel is continuing to pursue a proactive, aggressive line against Iran even as, in Israel’s view, Washington adopts a conciliatory approach and seeks a quick return to the nuclear accord.
The report in Haaretz about the naval campaign was preceded by a report, narrower in scope, in the Wall Street Journal. If the source of that report, which appeared at the beginning of March, was the Biden administration, it might attest to the Americans’ desire to neutralize Israeli background noise ahead of the resumption of the nuclear talks.
But if that was the original intention, it completely missed its target. Precisely the reverse happened: Additional details were made public in Israel, the Iranians attacked another Israeli-owned ship and Israel seems to have reacted for its part by raising the bar in response.’

‘As usual, the question is the extent to which this continuous, successful operation serves the final goal of harming Iran’s capabilities and standing, and what risk it entails for Israel. The two Iranian counterattacks were largely symbolic, causing little damage and striking vessels that are only indirectly linked to Israel. But the potential for future damage is far greater, because almost all of Israel’s trade is by sea and involves lengthy routes that are very difficult to protect effectively.
The continuation of the naval attack policy is a contentious issue in the defense establishment and within the Israel Defense Force General Staff itself. Some senior figures believe that the benefits that can be derived from such a naval campaign are limited, that the pretension behind it is excessive and the risk involved is too great.’

The NYT called it ‘a regional shadow war’ (see here) but it’s interesting to see that part of this shadow war, the Israeli naval operations in the Red Sea are seen by the military establishment in Israel as unnecessary. The sentence ‘the pretension behind it is excessive,’ is a bit mysterious.

For years now we have read warnings that the shadow war might turn into an all-out war, and of course this is still possible.
But it’s fair to say that both Israel and Iran have no interest in an all-out war, all they want is a subdued shadow war, and maybe not even that.