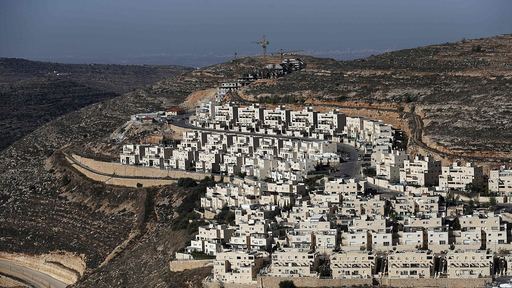 On the settlements and an exceptional convert – Meirav Moran in Haaretz:

‘Ulrich Jacov Becker looks at the West Bank settlement enterprise around him and is appalled by what he sees. Major highways are being paved, tunnels are being excavated, more and more residential units are going up in hilltop communities whose numbers are continually expanding. He’s certain that all of this is a historic mistake, a disaster with long-term implications.
Left-wingers can identify with Becker’s distress, but they’re on different wavelengths, because the problem he sees has nothing to do with the occupation or future political arrangements intended to resolve the Israeli-Palestinian conflict. Those issues don’t bother him. A German-born architect and town planner who moved to the settlement of Tekoa for ideological, and even spiritual, reasons, Becker is concerned about something radically different: The settlement project is dear to his heart, and he’s fearful for its future. In his perception, howver, terrible mistakes are being made in planning and construction of the settlements (and the network of roads connecting them) that could undo the whole enterprise.
“We think that in Judea and Samaria we are restoring the glory of the ancient Holy Land, but that’s wrong,” Becker says. “There was an opportunity here to learn from the mistakes of the 1950s new-immigrant towns and to build settlements that would bind Jews to their land. But what’s being built here are not towns and villages that will sustain the Jewish people in its land for another 500 years; it’s a sequence of sick, rootless, American-style suburbs. You came to inherit the patrimony, but instead of truly building the land and being built by it, people just count how many residential units are being built on the next hilltop.’

‘Becker’s take on the settlement situation is indivisible from his own, unconventional life story. Now 38, he was born to a non-Jewish, atheistic family in the small fishing town of Warnemünde, on the Baltic Sea, 250 kilometers north of Berlin. He was a young child in communist East Germany, with no connection to Judaism, Israel or the settlements.
At 18, a decade after the fall of the Berlin Wall and facing conscription into the German army, he chose the option of alternative service – to do social and community work in a foreign country. He had hoped to get to France or Portugal but he wasn’t Christian enough for the volunteer organizations in those countries. Instead, he found himself in Israel. He lived in the country for a year, working as a volunteer at a center in Kiryat Ono, near Tel Aviv, for people with disabilities.’

The connection between them became serious, and Becker converted to Judaism, to the chagrin of his mother. “She would have been equally disappointed if I had become a Muslim or a Christian,” he says. “For my mother, religion remains an opiate for the masses.” Inspired by that same mother, who had always dreamed of becoming an architect but was sent to work as an engineer in the boondocks by the East German labor ministry, he enrolled in as an architecture student at the Bezalel Academy of Arts and Design in Jerusalem, where he earned his first degree, and completed a master’s in town planning at the Technion – Israel Institute of Technology. He worked in a veteran Jerusalem architectural and town planning firm, designed the streetscape for the Jerusalem light rail system, and recently, he was sent to work in the Arad Municipality as part of a government-sponsored program in which various professionals are sent to bolster the work of local governments in outlying areas.
At first he and Oshrat lived in the Har Homa neighborhood, in south Jerusalem. After their three children were born, the family moved some 20 kilometers further south to a home they purchased in Tekoa. The transformation was complete: an East German atheist had become a religiously observant settler.’

‘The problem, Becker continues, is that the settlements’ underlying rationale was an “ideology of anxiety”: “Zionism has a special method of development: You wander around the country and notice – a Jewish settlement is lacking here. And presto! You drop some people there and you bound from one hilltop to the next. And then everyone is surprised that it’s not possible to provide normal public transportation between settlements that are perched on hilltops instead of being on the natural route.
“Expansion is not a manifestation of courage, it’s an admission of failure. We’re acknowledging that if we do not disperse Jewish settlements across the whole territory, the country is not ours. Instead, we should conquer like the Romans did: seize strategic locations, dig in at intersections and thoroughfares – not flee to the hilltops like rebels or outcasts. In the past, walls were built around cities that compelled them to develop inwardly, so everything stayed close.”’

‘We’re left with roads, traffic congestion, boredom and no soul. They [the authorities] don’t know how to plan a place that people can become attached to and that will become part of their identity.” The road between the town of Efrat, in the western part of the Etzion Bloc, and Tekoa passes through the Palestinian village of Tequa. Its houses are old and built in patchwork style, and the road through town is poor, but the street is bustling with life and businesses are flourishing. When we leave the village, we return to the bleakness of the Jewish settlements. A settlement can be seen as a dead end, in more then one sense. The settlement is literally the end of the road. No one comes here by chance.
Tekoa is trying to rectify its situation. There’s no barber shop, cosmetician or bike shop there, but on Fridays a makeshift market operates across from the grocery store and sells homemade beer, fresh grape juice, cheeses and locally made vegetable pies. At midday there’s a performance by musicians. Shlomo Bashan, a Tekoa resident and husband of the musician Karni Eldad, is one of the organizers. He knows that many people show up to enjoy this rare opportunity to meet other people. He too blames the government bureaucracy for stifling the economic independence of the area’s residents (the Jewish ones, of course). And he too agrees that it’s worth learning from the Palestinians, among whom commerce has developed in a natural way.’

‘“That’s it, from this point, everything becomes a Be’er Sheva bypass route,” Becker says. “It’s apparently not profitable to go on cultivating olive groves and breeding sheep – but it’s also not profitable to breed cattle in the Alps or grow vineyards in Provence. For the Europeans, though, those are national assets, so the state pays farmers who try to make a living that way. Here people talk about ‘love of the land’ but trample all the beauty with four-lane highways and roads in every direction to move large numbers of vehicles quickly from place to place.” The “tunnels road” that links Jerusalem and the Etzion Bloc is currently having its number of lanes doubled. Becker observes the roadworks with despair. “Money is being invested in infrastructure so that everyone will get up in the morning and drive to the country’s center,” he notes. “If the price of gas goes up, there will be no settlement project. In the end the settlers will get fed up with living on wheels and laying out a quarter of their salary for mobility and returning every evening to a sleeping bag. If the state sees us as the population that is realizing in practice the Jewish people’s right to its land, then we deserve to be more than an American bedroom suburb.” In Becker’s view, it’s important for West Bank roads to continue to pass through Palestinian villages and not morph into bypass expressways. That, he says, is the path to shared life. “When people buy and sell to one another, stand in line and travel together on the bus – it builds confidence,” he says.’

Ulrich Jakov Becker is, needless to say, one of the more interesting characters I’ve come across in newspapers in months.
And he might have a point. The settlement project has become more and more an American suburbia project. There are still some hardcore ideologists, especially in Hebron among the settlers, my guess is that the majority of the settlers might long more for mundane convenience than for Messianism.
I remember meeting a man in my sister’s settlement, not very religious, but ideologically very much to the right. He was planning to move out of the settlement. He had done enough, he said.
And some of the settlers have probably more contact with the Palestinians than many of the leftists in Tel Aviv. Whether this will bring peace is another question.

The big question of Israel is whether it needs an outside enemy in order to quell the internal divisions, not in the last place the divisions between the secular and the religious Israelis.
I used to listen to rightwing Israelis talking (in my sister’s settlements) about the demographic timebomb of the Palestinians.

The Haredim appear to be a more urgent timebomb.