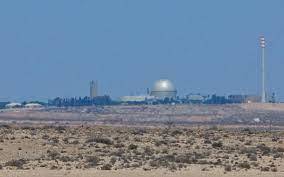 Some events in Syria and Israel tonight.
Reuters:

‘Israeli army has carried out an attack in Syria overnight Wednesday in response to an errant anti-aircraft missile that was fired from Syria and landed in southern Israel earlier that evening, the Israeli army said.
The IDF confirmed in a statement that the Syrian missile was fired toward one of its aircrafts. The missile overflew its target and landed in Israel. In response, the army attacked Syrian missile batteries as well as other military targets in neighboring Syria.’

‘The missile triggered sirens in the Bedouin town of Abu Qrenat near the Dimona reactor.
A Reuters reporter about 90 km (56 miles) away from Abu Qrenat heard the sound of an explosion minutes before the military's text message.
Israeli media have said for weeks that air defences in the area of Dimona and the Red Sea port Eilat were being beefed up in anticipation of a possible long-range missile or drone attack by Iranian-backed forces - perhaps from as far away as Yemen.’

It seems unlikely that Syria fires a rocket aimed at Israeli aircraft near Syrian airspace or in Syrian airspace and that this rocket misses the aircraft but ends up, by mistake, in the neighborhood of the Israeli nuclear reactor Dimona in the southern part of Israel.

More likely indeed, this was Iran’s response to Israel’s provocations – if that’s the right word – of the last couple of months.
Whether the rocket was meant to cause damage or was just meant as a warning is difficult to say.
But I’m fairly sure that a rocket meant as a warning can cause some heavy damage, just by mistake.
And that’s how wars begin.